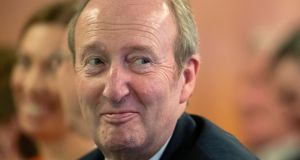 Irish football’s last big shindig at the Mansion House is perhaps best remembered for the car crash moment when Steve Staunton, at his unveiling as Ireland manager in 2006, asserted that “I’m the gaffer”. For all its apparent comedic potential, the three and a half hours of Shane Ross’s stakeholder’s forum passed without a solitary laugh out loud line.

That may not seem to be saying much but Irish football has been on a bit of a run of late.

Ross might have been getting just a little carried away when he described the whole affair as an “adventure” in his closing remarks but the general sense among the 200 or so invitees who had attended was that it had been a worthwhile affair.

Quite what becomes of all that was said now is another thing; a mountain of notes is apparently on its way to the committee currently working to devise better governance structures for the association, but there was no shortage of views expressed, that’s for sure, and even some consensus.

There certainly seemed to be widespread agreement that the Airtricity League must play a central part in any attempt to reform and revamp the wider Irish game, although as one club representative pointed out afterwards, none of the nine people who featured in on-stage panel discussions is actually actively involved in the league right now.

There were well made cases for greater representation at the Irish football’s top table by representatives of players and supporters with the suggestion that other sections of the game might be given seats too, but a lot of the discussion still seemed a little off topic.

Briefly, a section of the second panel involving Sarah Keane of Swim Ireland and the OCI, as well as former FAI general secretary Brendan Menton, seemed to get to the heart of things with the pair exploring the specifics of how a new board and supporting structures out at the association should look in the aftermath of the organisation’s AGM in July.

Menton, though, raised what he seems to feel is the very real possibility that it will look rather similar to the one we have now when he observed that “it’s the same old AGM and it’s going to require 117 to change the rules. Is that going to happen? I have my concerns.”

There was certainly little enough here to support the notion that the current board are enthusiastically engaged with the process. A couple of members attended, as did interim chief executive Rea Walshe and quite a few staffers, but the organisation seems to have declined to play a more prominent role in the proceedings.

There was further embarrassment for it too with the confirmation from Ross that the association had actually requested the secondment of Noel Mooney – who seems not to have been invited – from Uefa rather than, as it had sought to suggest last week, having him sent to them “as part of a package”.

The logic of recruiting someone widely perceived to be such a staunch ally of John Delaney at the time that they are trying to facilitate the former chief executive’s exit without the payment of huge compensation is intriguing. The problem for the board members, of course, is that any findings of wrongdoing or mismanagement against Delaney would inevitably reflect poorly on them too.

Niall Quinn’s group finally published their document which, the former international freely admitted falls down somewhat in the area of funding. There is plenty of common sense there, some really interesting ideas and aspirations as well as some elements that are actually surprisingly unambitious but, he acknowledged, the group need the FAI to help them attract the mix of public and private funding they believe can be attracted.

As on every other front, then . . . over to Abbotstown.