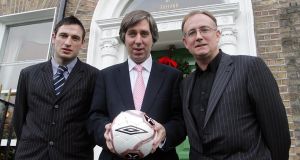 The cheery quotes from FAI president Donal Conway contained in the press release announcing that Noel Mooney would be taking a pivotal role in the association over the coming six months were clearly intended to convey a sense that the Limerick man’s return was seen as welcome around Abbotstown. That it went out late on a Sunday evening said all you needed to know about how the organisation reckoned the news would be received elsewhere.

Even at that, the reaction of Minister for Sport Shane Ross must have come as a shock out at the National Sports Campus. To actually attempt to veto the appointment would leave the Government open to a charge by Fifa of improper interference in the association’s affairs.

But at the Mansion House on Friday, Ross made clear that he is still hoping Mooney might not take up the position on Monday,  restating his view that he is entirely the wrong man for the job.

And in two newspaper articles to appear this past week under Ross’s name, the Minister had left absolutely no room for doubt regarding his view on the matter.

“Mooney may have many talents,” wrote Ross, “but he is one of the last people on God’s Earth suitable for this job.”

It is not clear at this stage whether the two men have even met but the view is not hugely at odds with general one held by those who do know the 43-year-old and have spoken with The Irish Times in recent days.

Mooney is, for the most part, regarded as a mildly eccentric character, well liked among those who knew him as a player and admired for industry and determination by pretty much everyone who has encountered him since. Nobody from either era, though, goes so far as to suggest he is well suited to the role of running the FAI.

There is a story that does the rounds from his early days as the marketing man in the association which involves a plan to launch a text service for supporters of League of Ireland clubs encountering a hitch that meant the first round of messages would not go out. Mooney, it is said, returned to his office and began trying to text every Cork City fan who had registered, somewhere between high hundreds and a couple of thousand, individually from his own phone.

He had, in his day, enjoyed a good playing career which was eventually cut short by injury. At senior league level, he played for Limerick, Cork City, with whom he won the FAI Cup, and Shamrock Rovers. He is remembered as a capable goalkeeper albeit one who was subject to the occasional lapse in concentration and colourful moment; “a character,” as one former team-mate puts it, but still a valued member of the side.

It is said that he came down for breakfast the morning after the cup final in a club tracksuit and street shoes and was entirely bemused by how amused those around him were. His decision to star in ads for a hair restoration clinic also generated plenty of laughs but he was admired too for the way he appeared to take the inevitable taunts that followed from the opposition fans, who would goad him from behind his goal, entirely in his stride.

A semi-professional player, he worked as a car salesman, started a company that sold health and safety equipment and still managed to amass some marketing qualifications. Somewhere in there too, however, there was a car accident in which a young woman died. Mooney, it seems, fell asleep at the wheel and his vehicle collided with hers one night in 2001 and he was convicted of careless driving, rather than the more serious charge he had originally faced, and fined a little over €400; a sanction that, one newspaper reported last week, still angers her family.

When John Delaney got the job of chief executive at Merrion Square a few years later, Mooney was appointed to head up a new team of part-funded club promotion officers, an important appointment for both men.

Ultimately, the scheme did not work out but Mooney was far from the only one responsible for that. He is remembered, though, for setting unrealistic targets, floating what were regarded as slightly far-fetched schemes and, as much as anything, his closeness to Delaney.

The relationship became strained a decade or so ago when a London-based fund staged an unlikely takeover of his former club, Cork City, and sought to recruit him to be run things on the ground.

He is said to have played the situation rather well, obtaining a new title, wider role and substantial pay-rise from his employer. There appears to have been no lingering ill-will though; a couple of years later he moved on to Uefa, a step that would have been impossible without the backing of Delaney.

His initial job there was in marketing and those who saw him in action say that between being personable and possessing the capacity to deliver a pretty decent presentation, he did well enough. A move into a “business development” role, one where he is supposed to help member associations improve their commercial activities, may have served to highlight his limitations. He was in Gibraltar when Ireland played there a couple of months back, apparently advising the host association. Few believe he would have been performing a similar role with Germany, or another of Uefa’s bigger associations.

That, though, is not what concerns the more sceptical of association watchers as he prepares to take on the role of “general manager for football services and partnerships”. Rather, it is his closeness to Delaney, the fact that a board that sought to bring him back at this point appear to see that as a plus  and the lingering suspicion that he had a hand in the Jonathan Hall report.

His relationship with Delaney did not merit so much as a mention in the interview he did with the FAI’s own communications director after last week’s announcement (he and the association declined requests for outside interviews including one from The Irish Times) while a rather specific question about the report prompted a denial.

His relationship with the former chief executive may stretch all the way back to the early 1990s when Mooney played in the FAI Youth Cup with St Michael’s, the Tipperary club that Delaney had also played for. There is an eight-year age gap so it is not clear whether they did actually know each other at that point but the connection would almost certainly have played well with an administrator who liked to remind people of his own roots.

Mooney, meanwhile, graduated with Hall from the Paris-based Sciences Po with an Executive Masters in European Sports Governance in 2016. The pair are a few feet apart in a widely circulated picture of that year’s class and there is the suggestion that their paths crossed in other ways, although that would hardly be a surprise given their respective involvements around the game. Still, his proximity, in Gibraltar, as the association were using the Hall report to hide behind as they repositioned Delaney, only added fuel to the fire.

He was seen speaking at length with Delaney that evening and there are those who fear he might continue to do so during a spell at Abbotstown that some also believe is intended to run well beyond its initial six months, just as his former boss’ interim spell did.

But then there are a few too, who wonder just how he would cope in the role if he does not.