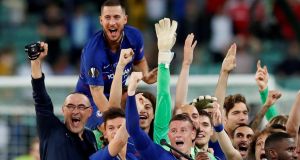 David Luiz has insisted there will be life after Eden Hazard at Chelsea and earmarked Callum Hudson-Odoi, the young England forward whose impressive campaign was cruelly cut short by injury, to fill the void left by the departing Belgian.

Hazard confirmed his intention is to leave for Real Madrid in the immediate aftermath of an inspirational performance to claim the Europa League at Arsenal’s expense, with talks between Chelsea and the Spanish club ongoing.

A fee of around €115m should allow the forward to swap Stamford Bridge for the Bernabéu after seven seasons in the Premier League, with the trophy claimed in Baku his sixth major honour from his time in London.

The 28-year-old spoke to his teammates and the manager, Maurizio Sarri, some time ago to make clear his desire for a fresh challenge, with all accepting of his decision.

Asked who could step into the breach and replace Hazard at a club under a transfer embargo, David Luiz said: “Let’s bring in Messi and Ronaldo. Look, if he goes, I just wish him all the best. He’s a fantastic friend and a fantastic player.

“For sure we’ll miss him if he leaves. We started playing together a long time ago, when we were both so young, and now he’s a player everyone in the world knows. They know his class. If his decision is the best for him, I just wish him good luck because he deserves it.

“This is part of the cycle of life: some stories finish and others begin. We have some main talents at the club to replace him, and opportunities for many players to be like Eden.

“Callum is our player from the academy, a boy with talent who has an opportunity to be a legend one day. He’s known this club since he was young, and he has the talent one day to be like Eden. So it’s a new history for Callum, a new story. It didn’t start so well for him because of the injury, but it is time for him to improve in other sides [of his game].”

Hudson-Odoi is recovering from a ruptured Achilles tendon, as is his teammate Ruben Loftus-Cheek, with the club expected to step up efforts to secure the former to a new long-term contract.

The 18-year-old handed in a transfer request in January in an effort to secure a move to Bayern Munich, though he then found opportunities more forthcoming before succumbing to the injury in late April. Chelsea hope to have him fit early next season.

The club’s victorious players were visited in the dressing room at the Olympic Stadium by Roman Abramovich and flew back from Baku on Thursday after a party at the team hotel overnight, with Sarri’s future to be discussed in the days ahead.

Juventus are expected to formalise their interest in luring him back to Italy, and would be willing to buy out his €5.5m-a-year contract to compensate Chelsea. Sarri’s post-match demeanour was that of a man who almost expected to leave, insisting his opinion would count for little in those discussions with the director Marina Granovskaia and the board.

David Luiz said of the manager: “He is doing a great job, and has done despite all the difficulties we had this season. We have finished in the best way for him, winning a trophy for him in his way. It was the best way to end the season for him, and he deserved that.

“He has trained so many clubs in lower divisions, doing another job [as a banker] and then he quit to try a big journey and do something in football. Of course he’s going to be emotional when arriving in a big European final. Maurizio has connected with us, and that’s why he loves this group. He did great.”

1 Tipping Point: Eddie Jones’s rhetoric is out of place in a febrile political climate
2 Maguire and Martial head Manchester United past Chelsea
3 Eddie Jones continues to revel in putting rugby’s nose out of joint
4 Jürgen Klopp wants Liverpool to show they are contenders
5 On healing and wild hurling: The re-education of Diarmuid Lyng
Real news has value SUBSCRIBE