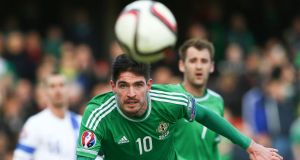 Kyle Lafferty: “I had to grow up sometime. The team and the country needs the Kyle Lafferty with the head screwed on”. Photograph: William Cherry/INPHO/Presseye

Two years ago this week Steven Davis was part of a Northern Ireland side that lost 3-2 to Luxembourg on the way to finishing fifth in their World Cup qualifying group.

Yesterday Steven Davis sat at Windsor Park, Belfast, and was able to declare: “We’re on the cusp of something really special.”

Northern Ireland are a team transformed. Defeat Hungary here tonight and Michael O’Neill’s team will have made history. Northern Ireland have never been to the European Championships finals.

The last time they were making this kind of impact was in the 1980s. There have been some barren times since – a decade ago the team went 13 games without scoring – and Luxembourg in September 2013 was another.

“When you look at it that way, it has been quite a turnaround,” Davis said yesterday, “but we saw signs of progress, and something to build on.

“In this campaign we have put everything together. Things have clicked; now we have to stay focused. Everyone is just embracing the situation. I don’t sense any nervousness.”

There is another big anniversary – 10 years ago today David Healy scored a famous winner against England at Windsor Park – but the Luxembourg date is more instructive in terms of understanding the scale of what O’Neill and his players have achieved since.

Kyle Lafferty has started all seven games, and scored in five of them. No one personifies the transformation of Northern Ireland more than him.

The striker from Kesh in Fermanagh is now at Norwich City as his 28th birthday approaches. In theory Lafferty is a Premier League player but he is on his way back from injury and has not played for Norwich this season. Last season the club sent him on loan to Turkey and, with Leeds United interested, there may be another move soon.

Whatever happens, Lafferty is a changing man. His goal against the Faroe Islands on Friday night was his sixth in qualification and he is in no doubt as to whom he should thank.

Lafferty missed that match in Luxembourg as, four days earlier, he had been sent off 13 minutes after coming on as a substitute against Portugal. A match Northern Ireland were winning 2-1 was lost 4-2 and, winded and wounded, they slumped against Luxembourg.

“The transformation is down to Michael,” Lafferty said of O’Neill. “He sat me down the day after I was sent off against Portugal. It’s difficult when you think you’ve got a good relationship with someone and a guy you respect is saying things that hurt you.

A lot of managers wouldn’t have done that.

“He sat me down and talked to me like an adult. The things he said, he actually made me believe the lads need me in the team. He made me wake up. Had it not been for the sending off against Portugal I don’t know if I would be in this position now, helping the team.

“I had to grow up sometime. The team and the country needs the Kyle Lafferty with the head screwed on, not the clown.”

O’Neill yesterday laughed down the alleged “special relationship” between him and Lafferty, though there were still some warm words from the former Shamrock Rovers manager who once shared a Newcastle United dressing room with Paul Gascoigne.

“Kyle’s heart has always been in the right place,” O’Neill said. “I think he knows he’s maybe made mistakes at times – young players do.

“But what he’s given for me on the pitch has never been in question. I think he just seems in a good place. As Steven says, the squad’s always brighter when Kyle’s around. But he’s fully focused on what he wants, and he’s writing his own story in terms of the number of goals he’s scored. As a lad I like him. I’ve been in dressing rooms with players who have been lively to say the least.”

Another Lafferty goal tonight would be significant, not least because Hungary, having lost to Northern Ireland in Budapest in the group opener, have not conceded in their last five qualifiers. Hungary are also ranked higher.

1 Six Nations: Ireland v England all you need to know guide
2 Owen Doyle: Day of the jackal may be coming to an end
3 Andy Farrell ticking all the boxes in advance of England showdown
4 Ireland wary of Peyper calling the tune as they head for Twickenham
5 David Brady says he's witnessed illegal payments of GAA managers
Real news has value SUBSCRIBE
Crossword Get access to over 6,000 interactive crosswords