Niall Quinn: ‘Who are the FAI trying to fool?’ 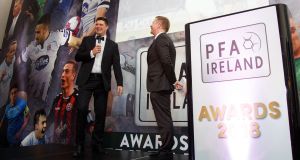 The public conversation Niall Quinn has been driving began following an invitation before Christmas to the PFAI awards night in Dublin. Photograph: Tommy Dickson/Inpho

Niall Quinn has a story from 1983 about a knock on the door at his house on Hillsbrook Drive in Crumlin. When Quinn answered there were two men standing in front of him: Jim McLaughlin and Noel King, manager and coach of Shamrock Rovers. They were interested in the 16-year-old’s future and whether he would like to spend a season or two of it at Milltown.

Quinn was already destined for Arsenal by then. But he had been going to Rovers to watch League of Ireland games, enjoyed doing so and was keen to finish his Leaving Cert. His mother, Mary, a teacher, also wanted him to stay to complete his education.

1 Q&A: How long could it take to form a new government after Election 2020? Could things get messy?
2 David Baddiel comes to Ennis to meet a Holocaust denier
3 Love Island tribute to Caroline Flack hides the truth
4 Two Irish passengers on cruise ship test positive for coronavirus
5 €35,000 a bottle: most expensive Irish whiskey goes on sale today
6 Cardiologist saved by paramedics after heart attack at Dublin Airport
7 Body part found on Donegal beach by person out walking
8 First Look: New wine bar opens alongside Dublin car park
9 Mediterranean diet fuels bacteria that may reduce old-age frailty
10 Woman says she was raped as child by ‘wolf disguised as an uncle’
11 Ireland to stick with winning formula against England
12 Paraic O’Donnell: MS is meticulously destroying me. I am being unmade
13 I’m happy I went vegetarian. I have no desire to eat meat again
14 How can I view my dead brother’s will if I’m not the executor?
15 Revealed: Where to find Ireland’s best breakfasts and brunches
16 Aodhán Ó Ríordáin running to become Labour Party leader
17 Galway’s traffic is ‘crippling and stifling city living’
18 What you need to know about pensions
19 Wales cry foul over Furlong’s scrum technique
20 Fintan O’Toole: Post-election urgency needed as voters run out of patience
21 New virus about 20 times deadlier than regular flu
22 Dancing with the Stars has hit Father Ted levels of farce
23 Approval granted for more than 650 apartments beside St Anne’s Park, Dublin
24 Cummings responds to critics over adviser’s race remarks
25 Woman waited for mother, aunt to die before reporting sex abuse by cousin
26 People over 50 led vote for change, say political parties
27 Brian O’Driscoll accuses England boss Eddie Jones of ‘scaremongering’
28 The forgotten Irishwoman who once ruled the New York fashion industry
29 Green leader says left-leaning coalition would be unlikely to last
30 ‘Exposure doesn’t pay bills’: What artists say about freebie culture
31 Fine Gael’s plan for opposition a sign of ‘humility’, says Coveney
32 Dublin council official calls for ban on parents driving children to school
33 Manchester City could face new Uefa investigation into sponsorship deals
34 Murder accused at diesel laundering operation when garda shot, court told
35 Woman who says she was trafficked from Nigeria wins court challenge
36 Over-reliance on inhalers putting asthma sufferers at risk
37 Lack of process for homeless people seeking Jobseekers Allowance ‘unlawful’
38 Provisional liquidator appointed to Dublin engineering firm
39 Getting closer to the whole truth of the Troubles
40 Woman sues over alleged failure of Breastcheck clinic to diagnose cancer
Real news has value SUBSCRIBE