Mick McCarthy must squeeze every last drop from Ireland squad

Despite lack of star quality, Ireland should have enough to see off Gibraltar and Georgia 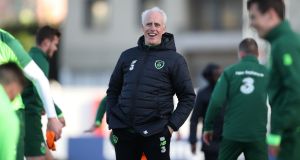 Mick McCarthy during training ahead of Ireland’s game against Gibraltar. Photograph: Peter Cziborra/Reuters

Gibraltar boss Julio Ribas suggested on Friday that Mick McCarthy had shown during his first period in charge of the Ireland team that he had what it takes to get a team to a major championship.

His real speciality, of course, was guiding his side to second spot in qualification groups but happily that will do rather nicely this on this occasion.

With Switzerland and Denmark starting as firm favourites to progress from Group D, upsetting the order of the seedings represents a major challenge for the manager and his players. Drop points on Saturday afternoon, though, and they are likely to be left facing an almost impossible one.

Things could have gone better for the 60 year-old since his reappointment late last year. None of the key players he had hoped would declare for Ireland have done so, while Declan Rice has decided to play for England, the biggest disappointment to date.

He has inherited a group that is lacking star quality, short on firepower and desperately lacking in confidence after a miserable year, but he still comes into this game with a squad that should be comfortably strong enough to do the job required. Alan Browne, Callum O’Dowda, Ronan Curtis and Shane Long all miss out but the likes of Séamus Coleman and Robbie Brady are back after lengthy lay-offs.

Long’s absence deprives the manager of power and pace up front but doesn’t feel like the blow it once would have been. James McCarthy’s failure to get back in at Everton, however, means he is missing his most likely midfield anchor in a completely full strength side.

Perhaps the most obvious positive is the form of Matt Doherty, a player he knows far better than most. The Wolves right back is sure to be valued more highly by the new manager than he was by Martin O’Neill, but will still have to play at least slightly out of position due to Séamus Coleman’s status within the team.

The broader challenge for McCarthy, though, will be to deliver on his reputation for getting the very best out of the players he has available to him, many of them middle ranking. He has form where David McGoldrick is concerned and has suggested that he sees the 31-year-old being a big player for him again over the course of the coming campaign. Helping others – like Sean Maguire, Conor Hourihane and Enda Stevens – to make the step up from Championship football will be of critical importance if Ireland are to hold their own in the key games against the Swiss and the Danes.

In that sense, these two might be regarded as something of a preparatory exercise but Scotland’s result in Kazakhstan is a timely reminder of the perils of presumption. Given how close a couple of our games against Georgia have been in the past, though, that is probably not going to be a huge issue on Tuesday.

A slip-up against either opponent would be a terrible blow to McCarthy’s attempt to rebuild the squad’s confidence and put them under huge pressure to deliver big results later in the year.

In the three campaigns he was previously involved with Ireland, 16 points was the average number required to finish second in a five team group with the actual totals achieved ranging from just 12, in one instance, up to 18.

The European Championship campaign of 2000 probably looks the closest McCarthy might have to a blueprint. Notwithstanding that draw in Macedonia, Ireland won all four of their home games after which beating Malta away was enough to give the team a one point advantage over Croatia in third despite having lost away to their main two rivals.

The course of the following campaign was significantly different with Ireland earning a point in both Portugal and the Netherlands, an achievement McCarthy positively referenced here on Friday. Critically, the Dutch came to Dublin needing to win; something that contributed to their subsequent defeat, which was probably the single greatest event of McCarthy’s first spell in charge.

It is hard to imagine the current Irish side pulling off something like that right now but whatever their limitations, the squad should have enough going for it to ensure that this group comes down to its biggest games again. Even that might require the likes of Harry Arter, Jeff Hendrick and Robbie Brady to play the way they can a lot more consistently.

McCarthy, though, will back himself to coax that out of them. The FAI already has backed him to do that. And after years of dividing opinion, the manager has united fans once more although for the moment at least, it is probably more in hope than expectation.