Messi eventually finds his feet for the long haul

Argentine fans celebrated as a strike from Lionel Messi lit up the Maracana stadium in Rio de Janeiro on Sunday, June 15th, leading to a 2-1 victory over Bosnia. Video: Reuters 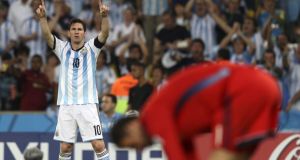 Argentina’s Lionel Messi celebrates his winner against Bosnia and Herzegovina at the Estadio do Maracana in Rio de Janeiro. Photograph: Marcelo Sayao / EPA 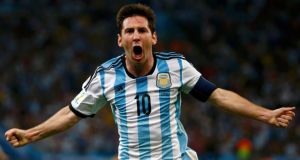 After all the build-up, all the hype, Lionel Messi’s World Cup started with what Argentina’s fans will hope was a slow burner of a performance. Considering they are desperate for their team to last the seven-game pace for the first time since 1990 that should be good enough for the opener. They have seen their side come flying out of the traps before only to trip up too early in the knockout stages.

Tens of thousands of them descended on Brazil’s beach capital, some driving thousands of kilometres without a ticket to see the player one blue and white banner referred to as the ‘Messi-a’.

He delivered with a fine goal and was named man-of-the-match. But it started fitfully in the legendary Maracanã stadium, packed for its first World Cup game in 64 years after a carnivalesque weekend when Brazilians, small but vocal groups of Bosnians and an estimated 50,000 Argentines partied on the beach and in bars across town.

For Bosnia and Herzegovina - the only debutants at this World Cup - the start was cruel, Sead Kolasinac turning a free kick into his own goal after just three minutes. One worried for a team whose mentality has been questioned but they responded well, not letting the occasion overwhelm them and even carving out several chances by half time.

But rather than inspiring Argentina the goal seemed to rob them intensity almost before the game started. Messi’s first touch came just before the goal. Picking the ball up on the halfway line he scooted towards the box but misread Sergio Aguero’s run. It would be the first of several misplaced passes before halftime.

As pre-match rumours had predicted Gonzalo Higuaín did not appear at the start but rather than a like-for-like replacement in Ezequiel Lavezzi, Alejandro Sabella opted for a back five, the former Sheffield United midfielder playing Hugo Campaganaro in a three-man central defence, long the zone of most concern for the country’s fans and commentators.

The fantastic four of Messi, Aguero, Ángel di Maria and Higuaín was instead a front two of Messi and Aguero, from which Messi retreated increasingly deeper in search of the ball. So far from goal, Bosnia had more than enough time to get men over to help out Muhamed Besic in marking him. When he did manage to jink a way into the box his final pass was off.

At half time, with Bosnia growing into the game after their early setback and the loud Argentine support quietened, Sabella had seen enough. The back five was dismantled, Campaganaro sacrificed for Higuaín. To provide better protection for the shorn defence Fernando Gago came on for the lively Maxi Rodriguez.

The half started with more pace from his charges. Messi kept coming deep but now he had more spaces to run into with Higuaín alongside Aguero. Even so, after an hour Messi urged his frontline further forward and started to heed his own advice. Picking up a stray Bosnian pass he was now closer to goal, flying into the box and passing to Aguero who shot over.

Despite the improvement there were growing hints of impatience among Argentine fans. A Messi free kick over the crossbar drew whistles from the locals. Brazilians have showered love on Messi since he arrived in Brazil. But the courtesy will not seemingly extend to matches themselves. The insults only roused the visiting fans. Their reward came two minutes later, their number 10 picking up a pass from Higuaín, running across the box and rifling a shot in off the left post.

Amazingly it was only his second World Cup goal in his third appearance at the tournament, the last one coming at the tail-end of the 6-0 rout of Serbia and Montenegro in Germany in 2006.

The ‘olés’ were now Argentine. Bosnia valiantly plugged away, bringing on another striker in Vedad Ibisevic in the desperate search for a first World Cup goal.

But if the first Argentine goal seemed to sap La Albiceleste of initiative the second invigorated them. The attacks were now ever more penetrating, Messi playing ever closer to the Bosnian box. But some of the looseness of the first half remained, not all his own. Three times he found himself in dangerous positions. Three times Di Maria failed to find him with a final ball. Sights still need adjusting at this early stage of the tournament.

Ibisevic got Bosnia a goal their battling effort deserved with five minutess of normal time remaining, worryingly for Sabella exposing Argentina’s fragile back line. Heartily celebrated by the small Bosnian contingent and their hosts it was the signal for Augero to come off for Lucas Biglia, Sabella preferred defensive midfielder when he seeks to shut up shop.

A final chance would fall to Messi in injury time but the ball seemed to get caught up in his feet after a pass from Di Maria finally found him in the box. Even so he ended the game to a final hosanna from his fans. He might lack the on and off field personality of Maradona or Carlos Tevez, whose shirt many of the Argentines proudly wore. He is a quiet captain who leads by example. But if this is the beginning of the long, seven-game run to the final that Argentina so craves, it will matter little to his followers.

5 Simon Zebo is heading back to Munster next season