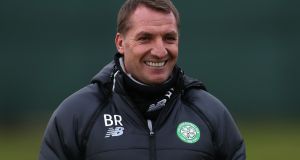 Manager Brendan Rodgers is looking for his high-flying Celtic side to impose themselves on Rangers when he makes his first trip to Ibrox on Saturday.

The Northern Irishman has enjoyed victories over Rangers at Celtic Park and Hampden since taking over the Parkhead club in the summer.

And the in-form Celtic will travel to Govan 16 points clear of Mark Warburton’s men with a game in hand, unbeaten in 23 domestic matches this season having taken full points from the last 14 league games.

Consequently, Rodgers will not deviate from what has been working so well in Scotland, even against Celtic’s traditional rivals who will be desperate for a win to give their fans some encouragement.

“I expect a very tough game, an intense game, a great battle I’m sure,” he said.

“But we arrive into the game obviously full of confidence and looking to impose our way of playing and our style on the game, but respect that it will be a tough match.

“In every game you have to win your battle. Individually and collectively.

“We always aim to play with big intensity and big aggression in our game and that is with and without the ball so we will anticipate that game again.

“What we have shown in the opening part of the season, there has been lots of games where you could say Celtic were under pressure.

“So we know it will be a great atmosphere at the game but in terms of our game plan there is no change.

“We arrive into the game knowing we average three goals away from home in the league so far, so it points to us going into the game with a big confidence but we understand and respect it is a difficult game.”

Rodgers experienced big derby matches as manager of Swansea and Liverpool and he looks forward to a typically frenetic encounter in the last fixture of the year before the three-week winter break.

He said: “My game I played at Cardiff, we won 1-0, it was one of the first games they had won there for a while, the derby games at Goodison Park were very intense and passionate and that’s what you expect and want.

“I am sure the Rangers fans will be really passionate about their team and that is how it should be, backing their team as the Celtic supporters do home and away.

“I am sure it will be a great atmosphere and a really good venue to play in.

“But it is a privilege for me wherever I have taken Celtic, from the very first game in Gibraltar (against Lincoln Red Imps) where we had aeroplanes in the background, and we finish off this period of the season away at Ibrox.

“But like I say, we always get a great support and we will have a good support this weekend as well.”