Chris Coleman’s wife rules him out of Swansea City job 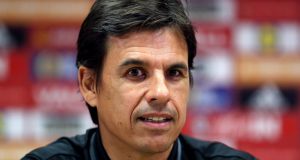 Chris Coleman is under contract with the FAW until the end of the 2018 World Cup qualification campaign. Photograph: David Davies/PA Wire.

Swansea City’s search for a new manager took an unexpected twist when Chris Coleman’s wife publicly ruled him out of the job, leaving Paul Clement and Gary Rowett as the main contenders for the post. Coleman had emerged as the frontrunner to replace Bob Bradley but the 46-year-old remains committed to managing his country and, barring an unforeseen turn of events, will not be returning to club football soon.

With any move for Ryan Giggs also viewed as highly unlikely – Swansea’s American owners have never been sold on the idea of giving the job to the former Manchester United player – Clement and Rowett are now strong candidates to take over at the Liberty Stadium.

Coleman was at the top of Swansea’s shortlist but they have received no encouragement in pursuing the Wales manager. Swansea have not made an official approach to the Football Association of Wales (FAW), contrary to reports suggesting otherwise, and it appears as though the Premier League club would be wasting their time if they decided to go down that route.

Under contract with the FAW until the end of the 2018 World Cup qualification campaign, Coleman says he has unfinished business with Wales and would need a lot of persuasion to believe that managing his home-town club is the right thing to do at this moment.

Swansea, who are 19th in the Premier League, four points adrift of safety and looking for their third manager of the season, would probably represent too much of a gamble for a man who has rebuilt his reputation while in charge of his country and is settled in that role.

His wife, Charlotte Coleman, offered her own take via social media earlier in the day, when she tweeted: “The Mumbles are lovely but my husband has said publicly after Wales we would hopefully move abroad – but good luck to Swansea!”

All of which turns the focus sharply on to the rest of the field, in particular Clement and Rowett. Clement was interviewed for the post only three months ago, when Swansea decided to appoint Bradley, and came across very well. The 44-year-old is assistant manager at Bayern Munich, where he is once again working with Carlo Ancelotti. He was reunited with the Italian in the summer after being sacked as Derby County manager in February, with the East Midlands club fifth in the table at the time.

A bright, young coach, Clement fits the Swansea prototype of old, as does Rowett, who is two years younger and impressed during his time as manager at Birmingham City and Burton Albion. Rowett was harshly sacked as Birmingham manager just over a fortnight ago and has been the subject of plenty of interest in the Championship.

Swansea are keen to make an appointment as soon as possible to bring some stability to the club. Alan Curtis, the first-team coach, and Paul Williams, the assistant manager, will be in the dugout for Saturday’s home match against Bournemouth. Swansea then travel to Crystal Palace three days later for another crunch game and, ideally, the Welsh club will have a new manager in place for that fixture.

Curtis, who found himself in exactly the same position this time last year after Garry Monk was sacked as manager, described Swansea’s predicament as the worst position they have found themselves in during their six seasons in the Premier League. He also believes that the managerial focus should be purely on the short-term. “I think it’s immediate,” Curtis said. “Somebody has got to get us out of trouble.”