Martin O’Neill needs to rally the troops for Wales 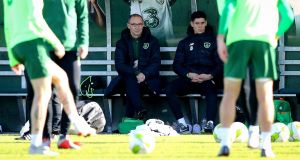 Martin O’Neill admits that his side need to do better against Wales tonight but there was little enough in his pre-match press conference on Monday to get anyone’s hopes up.

The players, he says, are giving their all while the tactics, he insists, are positive. The limitations of the current situation are such, he still seems to believe however, that next year’s qualifying group games proper might represent a more realistic timeframe for those demanding more.

The 66-year-old denied that his own focus has already shifted to beyond this Nations League and whatever about the top spot he says would be back up for grabs if Wales can be beaten, there is certainly some pressure to avoid a third-place finish as it would cost the team a second seeding in December’s Euro 2020 draw.

Ireland will, he insists in any case, be aiming to beat Ryan Giggs’ side but his own ability to engineer a victory is not, he contends, greatly helped by circumstances.

“I’ve said before, it’s a massive step to not be playing regularly in the Championship and come in and play in against Denmark the other night,” he says. “Whatever you say about them, they did actually do fine at the World Cup and got knocked out on penalties by a team that reached the final. I think sometimes you have to take few of those things in consideration.

“We have a lot of players playing here who don’t play regularly for their sides in the Championship. That’s a tough ask for them to come in overnight and raise it. To be fair to them, for most of the time, they’ve done so. And I think the record over the last number of years suggests that it’s certainly not a lack of heart. We wouldn’t have got where we have unless these boys wanted to do everything they possibly can when they’re here, wearing the shirt.”

The team, he says, may be “technically short”, but goes out equipped with a workable plan, one intended to allow it pose an attacking threat without surrendering too much by way of defensive security. Clearly, the absence of a prolific striker remains a major issue but he acknowledges that the team also tend to make life that bit harder for themselves by defending so deep that they struggle even more to pass the ball from back to front.

“I do think that we can try to push out and get up the field a little bit so that the distances between the centre-back position and midfield is not that far and so getting further forward [is that bit easier]. Maybe we are missing a bit of phenomenal athletic ability from the side so those distances are important and that we do try to work on that.

“When the danger is cleared for a start, let’s get up a little bit so it gives everybody a better chance. That’s sometimes easier said than done and sometimes because if we drop back, it feels that there may be safety in numbers but it is something that we should be working on, to try and get those extra six or seven yards that make all the difference.”

More likely, perhaps, to make one on this particular occasion is the absence from the Wales squad of four starters from the defeat in Cardiff. Gareth Bale, Aaron Ramsey, Ethan Ampadu and Chris Mepham are all out of the game and although O’Neill maintains Ireland’s opponents are better placed to fill the gaps, Giggs has handed call-ups to Gwion Edwards of Ipswich and Sheffield United’s Kieron Freeman.

There is little enough arguing with his assessment some of his own options just now; one of the strikers in contention to play a part in this game has played 20 minutes of first team football after a long injury lay-off while another hasn’t been able to get near the first team of his Championship side his since the summer.

More puzzling, though, is his apparent inability to coax more controlled football out of a group, some of whom seem better capable of it sometimes when playing for their club sides. His tone suggests some ongoing surprise at their struggles and he says the formation on Saturday was “very attacking” but the sense, in advance on his account of what he intended, was of a side seeking to keep things tight then snatch something significantly against better opponents.

O’Neill sees the absence of Séamus Coleman and Robbie Brady, both of whom should be back in March, as a substantial handicap which is fair enough, and he will be without Callum O’Dowda tonight due to what may have been a slight concussion suffered at the weekend.

Callum Robinson looks the most likely beneficiary of the 23-year-old’s head injury after having injected some much-needed life into Ireland’s attacking game against the Danes. There could be a change or two more, though, as he searches for further improvement.

The one achieved on Saturday yielded some much-needed defensive solidity, albeit against a side that had left their “tin opener” at home.

Wales, too, are weaker than they would have hoped for this trip to Dublin and arrive off the back of a couple of bad results since the 4-1 defeat of Ireland in October. That, on the face of it, presents an opportunity for this Ireland team but one that O’Neill might still regard as requiring a gamble.