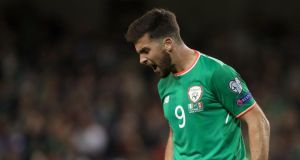 Shane Long’s admission to Martin O’Neill after Friday’s game that he “can’t buy a goal” just now is a fair reflection of the striker’s struggles around the area this year, but the problem is hardly limited to the 30 year-old.

Daryl Murphy’s early brace against Moldova must have come as a major relief for the Irish management, with the team’s remarkably low return around opposition areas having severely handicapped their attempt to reach Russia next year.

Robbie Keane’s departure from the international scene was sufficiently drawn out to seem painful at times but it is not hard to see why Giovanni Trapattoni and his successor were quite so desperate to squeeze every last goal out of the Dubliner.

Jon Walters was a slightly unlikely saviour in the campaign to reach France, but the full impact of the failure to uncover a natural goalscorer to succeed Keane has been felt this time around, with Long scoring just once despite being the generally undisputed first choice. Ireland managing just two at home before Daryl Murphy trebled his entire international tally over the first 20 minutes of the game the other night.

Long has never been the most prolific, and the Irishman is rightly valued by managers for other aspects of his game. Yet strikers do need to score, and he could always previously be relied upon to chip in with a few.

When he edged into double figures in a Premier League season for the first time in 2015/16, the sense that he might have moved up a level was widely seized upon, but that seems like a very distant memory just now, a little like his celebrated winner against Germany which was two years ago on Sunday.

It is February 11th since he last scored for club or country – it was for Southampton, as it happens, the fourth in a 4-0 win over Sunderland – and he has played 1,170 minutes of football between the two teams since then without finding the net. For Ireland it is precisely 600 minutes now since he got the opener away to Moldova.

O’Neill admits that the striker’s lack of confidence – evidenced in the three chances he passed up in Friday night’s game – have left him with a big decision to make. The fact that he kept making runs and got himself into the positions to have those chance may be seen as some consolation, but it’s a double-edged sword for the striker who won’t need to be told that he should have converted at least one, quite possibly all three of the openings.

The manager, though, has invested pretty heavily at this stage in the hope that Long would eventually come good and it would be quite a time to cut his losses. There are clearly no easy alternatives now as he sits down to pick his team for such a huge game. If there were he might have taken one of them before now.

What makes the situation more pressing is that none of the supporting cast of attacking players has done much to provide the team with a dig out when it mattered this year. James McClean’s flying start to the campaign has not been sustained, while others have not contributed at all in the way that might have been expected.

Jeff Hendrick has not added goals to his game in the way that he seemed to have the potential to in the wake of Euro 2016, while the addition of Shane Duffy’s aerial threat has made Ireland looked more dangerous around an opposition area at set-pieces but only delivered one goal directly. Robbie Brady has not even managed that in this campaign.

With Jon Walters absent and Kevin Doyle now gone, O’Neill has the hugely unproven options of Sean Maguire, Scott Hogan and Aiden O’Brien. O’Neill has made a couple of inspired calls in terms of team selections when his team has needed a very big win but starting one of those on Monday would be as big a decision as he has made since taking on this job.

Whatever he does the defence will presumably have to hold firm because the recent history of this team strongly suggests that if they are going to get the win they need in this game they will have to keep a clean sheet. The most memorable wins – Germany, Italy, and Austria – have all been by a goal to nil with only the only real exception being the home defeat of Bosnia and Herzegovina, when the visitors needed to win because of the earlier 1-1 draw.

Wales, as things stand, appear to need one themselves tonight, and they have only been kept scoreless in two competitive games over the last two years. Once was by Portugal in the semi-final of the European Championship. The other, of course, was by Ireland in March.

There is then the basis for hope, perhaps even some optimism for Ireland’s travelling supporters heading into this game but it is still no surprise that the bookies have O’Neill’s men looking slightly like long shots.

1 The Offload: Philip Browne’s grave outlook should be taken seriously
2 Tiger shines and Brady bites back as charity match proves an enjoyable release
3 Coronavirus: Leinster cancel sale of season tickets for 2020-21
4 Ken Early: Liverpool fans, Bamber Gascoigne and a close shave in Istanbul
5 As news gets better, can the pull of The Field be resisted?
Real news has value SUBSCRIBE
Crossword Get access to over 6,000 interactive crosswords