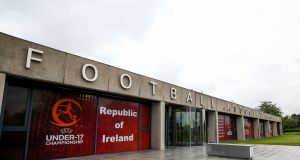 The FAI has completed its senior management reorganisation. Photograph: Inpho

The FAI has completed its reorganisation of senior management with Mark Scanlon appointed as the new director of the Airtricity League and Rea Walshe retaining her position as chief operating officer. High-performance director Ruud Dokter has also agreed a new 18-month deal with the association.

Currently the association’s national co-ordinator for schools and third-level football, Scanlon effectively takes over the League of Ireland role from former PFAI chairman Fran Gavin, who had been competitions director out in Abbotstown, a position that included responsibility for the league.

A former development officer for the association in Meath, Scanlon had been working with the schools and colleges sector for the past five years, during which time numbers had grown and its ties to the senior game have been considerably strengthened.

He studied sports management in UCD and has held various other roles during his time with the FAI including performance analyst with the Irish under-19 side.

It is unclear what Gavin’s new role with the organisation will be and there had been a suggestion at the time that the process of filling the four positions internally advertised got under way, that some well established figures might end up departing. But the suggestion on Wednesday as the appointments were announced to staff was that the Dubliner will be staying on.

Niall Quinn had been widely linked with the League of Ireland role as the process was kicking off last month, with expectations heightened by the fact that the job description initially posted to staff included deputising for the CEO at times, but it is understood that the former Republic of Ireland international did not apply.

Ger McDermott, meanwhile, is to take over the grassroots football role from Tom O’Shea.

McDermott, a former fitness coach with Bohemians who has been with the association for 10 years, has spent much of that time involved with its successful summer camp scheme and retains a role on that front in his current position as club and league development officer.

Walshe and Mark Russell, meanwhile, the organisation’s chief operating officer and commercial director respectively, have essentially been reappointed to their roles after having successfully come through the selection process.

Walshe came to prominence last year when she was had a short spell as acting chief executive but there had been some speculation regarding her future at the organisation. She had been the subject of some media reports during the past few weeks regarding the provision of personal legal advice to John Delaney and former honorary secretary Michael Cody towards the end of their time there.

The positions of finance director Alex O’Connell and operations director Barry Gleeson remain unchanged, while the press release sent out by the association confirming the appointments listed Stephen Kenny as international football director, a title he himself said last week he would not have. The Dubliner will clearly have an input at director level, however, whether there is a title to reflect that or not, while he will ultimately report to Dokter and the chief executive.

The process of hiring a permanent chief executive is ongoing. The closing date for applications was Monday, July 6th. Gary Owens, a close ally of independent chairman, Roy Barrett, who is doing the job on an interim basis, is widely believed to have applied and generally seen a frontrunner.

1 Ken Early: Frank Lampard’s problems start at number one
2 The Offload: Schools rugby talk in the Seanad appears tone deaf
3 All in the Game: Klopp gets the last laugh in quiz show
4 Rory McIlroy admits missing the crowds as he looks to end Major drought
5 Society can gain more than it loses by increasing crowd sizes
Real news has value SUBSCRIBE
Crossword Get access to over 6,000 interactive crosswords