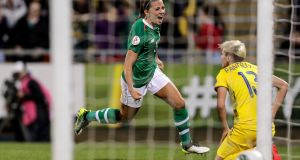 The Republic of Ireland may have made it this far as group leaders in their campaign to qualify for what is now officially called Euro2022 but there is a little less talk now about targeting top spot after the way Germany have been playing of late.

Vera Pauw’s side take on the eight-times European Champions in Essen at lunchtime today (kick-off 1pm, live coverage on RTÉ 2 television), knowing that even a draw would put them in a great position to qualify for a first ever major tournament.

The fallback position, though, is that the match might serve as useful preparation for next month’s trip to Ukraine and having spoken last year about having the ambition to beat the Germans into second place, captain Katie McCabe was rather more cautious on the eve of the game, suggesting that Ireland “will give them a good go”.

Finishing first would, of course, guarantee qualification but the three best of nine runners-up also skip the play-offs that will decide the last three places on offer. Although Ukraine have no points on the board, they have already played, and been well beaten by, the top seeds twice and with Ireland to come at home in October, still harbour hopes of justifying their seeding by clambering up the table with a late run of results.

Having won the match between the two, the Irish are hopeful ahead of the return match and in the event that they can secure another three points, anything from either of the games against Germany – who have four wins from four, 31 goals scored, none conceded – would very significantly boost the prospects of Pauw’s side securing automatic qualification.

Germany coach Martina Voss-Tecklenburg is missing Sara Doorsoun and Almuth Schult (both of Wolfsburg) and Bayern Munich’s Klara Bühl, all talented players, but retains the services of some of the continent’s very best and Pauw, who has a full squad to choose from, can only marvel at the quality of the replacements her counterpart can call upon.

Pauw insists that Ireland will set out to play “an open game” but acknowledges at one point that: “even if it is a big score, we will not collapse”. Actually advancing their qualification cause this afternoon would, however, be by far and away their greatest achievement under the current coach.

1 Golf clubs waiting to hear if they can stay open under Level 5
2 Hugo Keenan could start in changed Ireland team against Italy
3 Wijnaldum attacks ‘stupid’ Pickford tackle on van Dijk
4 Gerry Thornley: After 32 weeks the Six Nations is back up for grabs
5 Here is your handy guide to sport on television this week
Real news has value SUBSCRIBE
Crossword Get access to over 6,000 interactive crosswords