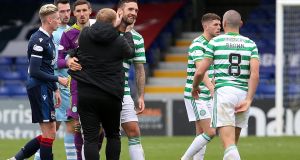 Irish businessman, Dermot Desmond, believes that the acceleration of changes in the broadcast and digital rights landscape brought about by the coronavirus pandemic is likely to prompt a rethink by English clubs of their opposition to the involvement of Celtic and Rangers in a reformulated Premier League.

In an interview with The Athletic, the club’s majority shareholder reveals that he offered to double Alex Ferguson’s salary at Manchester United back in 1997 in order to lure the Scot to Parkhead.

Ferguson, he says, expressed an interest in the job but insisted his priority was to win the Champions League with United, something he achieved two years later. A year after that, when asked by Desmond to recommend someone else for the Celtic job, he listed three men: Martin O’Neill, David O’Leary and Alan Curbishley.

O’Neill’s appointment transformed the club’s fortunes but Desmond believes that the current team is better than the one that reached the 2003 final of the Uefa Cup and he is believes that current boss Neil Lennon, whose side was recently beaten at home Ferencvaros in the qualifying stages of the Champions League, is seriously underestimated by his critics.

“I know when we appointed Lenny there were Rangers fans who thought we were handing them the league, but we felt that he had done an extremely good job at Hibs and he was a Celtic man through and through,” he says. “I have quite a few Rangers friends in business, all very nice people who subscribed to the former viewpoint. However, I did have a wager with a few of them, so I owe Lenny a night out.

“You underestimate Lenny at your peril. He’s a very intelligent individual, he’s got great awareness and integrity. As far as analysis is concerned, he doesn’t shy away from performances. When we’re succeeding, he’s looking where it came from and it’s the same with poor performances. He wants to play entertaining, attacking football… possession football. It’s about being able to consistently deliver that Celtic brand of football.”

Asked whether the idea of a “British” league is dead in the water at this stage, Desmond says that while there are no talks ongoing at present: “Everything now is about the size of clubs and their followings. It’s become a digital world - streaming, Zoom. This pandemic has changed things.

“Digital forces will, I think, make English clubs reconsider the construction of their leagues.

“Celtic and Rangers are in the top eight clubs in Great Britain by any metric - support, attendance, international appeal. At some stage, there’s going to be the realisation that if they want to maximise their revenues, then there’ll be a British Premier League. And there should be a British Premier League, because you already have a couple of Welsh teams in the English leagues. So why not?”

Desmond has much more recently invested in Shamrock Rovers and he expresses strong support for the All Island League championed by Kieran Lucid.

“If the structure is on an all-island basis, we could progress,” he says. “We have to look at the size of the island and replicate the rugby model. They have provinces and clubs, north and south, and they face each other on a weekly basis. While there are political and cultural differences, they are unified in developing the sport of rugby on the island of Ireland. I’d like to see that happening (in football).