Ireland braced for another daunting task against Netherlands 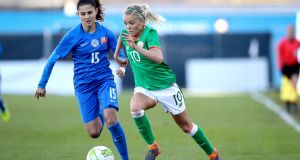 The Republic of Ireland’s Denise O’Sullivan tries to get away from Luica Suskova of Slovakia in the recent World Cup qualifier at Tallaght. Photograph: Ryan Byrne/Inpho

Having reached the midway point of the World Cup qualifying campaign, the Republic of Ireland will get their chance of a direct route to France against the Netherlands tonight but the more likely path will be through a second bite.

Three wins, allied to the draw against tonight’s opponents in Nijmegen six months ago, have propelled them to joint-top of the table in Colin Bell’s first campaign at the helm and now comes the ultimate test.

They may be ranked seventh in the world but Bell considers the Netherlands to be right now the best team on the planet. That appears more than just reverse psychology, given how dominant they were in lifting the European Championships last summer.

“I would say this could be a bigger challenge than the away game,” said the Ireland head coach when asked if the 4,000 expected at Tallaght tonight can give his side the advantage.

“This is the first time our team have played a double-header in the campaign, so there is the physical factor in having a second game just four days after beating Slovakia 2-1.

“Additionally, the Dutch will want to put five, six or seven past us. That’s a fact. They completely outplayed England at the Euros and basically let them off after making it 3-0.

“I honestly believe the Netherlands are capable of doing that against any nation. If we give them space and time on set-pieces, by getting those kind of things wrong and concede early or get tired, we’ll get hammered.

“The main thing is staying in the game. We want people coming to Tallaght supporting us right to the very end because they feel that something might happen; that there could be a sensation.

“I don’t just want them to think ‘oh, they were a brilliant team, they gave everything’. We want to be in there and we want to try our best to upset them.”

Central to that strategy will be the probable reversion to a five-player defence. The ploy worked a treat in Nijmegen, forcing the Dutch to rely on long-balls in the end to force an opening, and it will be a case of Ireland taking on the role of the away team for what could well be described as a mismatch.

“Beating Slovakia on Friday was vitally important in this window because it keeps us in the qualifying hunt, no matter what happens against the Netherlands,” stressed Bell about Amber Barrett’s late winner on Friday.

Whether the Donegal striker did enough with her brief goalscoring cameo to win a starting place remains to be seen as Leanne Kiernan’s pace might be relied upon to chase balls on the counterattack.

“The weaknesses are there in the Dutch team,” added Bell, the former Frankfurt coach who will once again face his former player, visiting midfielder Jackie Groenen.

“We showed in the away game that because they’re so offensive, getting players forward at pace, there will be times to exploit that. If it opens up, we’ll have to finish our chances this time.”

Should they game ensue as expected with the Dutch winning to claim outright leadership, then Ireland’s back-up plan of snaring a play-off spot takes flight.

Norway are also on the island, facing Northern Ireland tonight, and the destiny of Ireland’s ambitions to reach a major tournament for the first time ever could boil down to the double-header against the Scandinavians in June. Ireland conclude against their neighbours at Tallaght in September.

While there’ll be nobody in the dressing-room settling for second best, securing a runners-up finish was always the more achievable outcome.

That will only be enough to seal a play-off to France if their points tally is amongst the fourth highest across the seven groups. It won’t include their six accrued against Slovakia, based on the current standings.

All those permutations can wait though; tonight offers the opportunity to compete against the best and Ireland have recent history on their side.