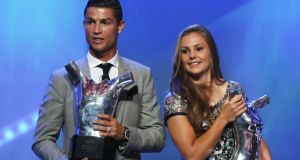 Much was made of the fact that both the Republic of Ireland’s two goalscorers in Friday’s win over Slovakia were home-based but tonight the part-timers will come up against a Netherlands side featuring some of the best-paid players in Europe.

Lieke Martens, the reigning Fifa Player of the Year, moved to Barcelona from Swedish club Rosengärd last July, reportedly on a contract worthy an annual salary of €180,000.

Amongst the other members of the European champions to be earning a six-figure salary is Shanice van de Sanden of Champions League winners Lyon, while Bayern Munich pair Jill Roord and Lineth Beerensteyn, along with Jackie Groenen from Frankfurt, are being well paid to challenge for the coveted Bundesliga title.

All of the other players in Sarina Wiegman’s squad, whether they’re based in Sweden, Spain, Norway or in the domestic league, are full-time professionals. In contrast, most of the 22-player Ireland squad named by Colin Bell for these latest set of World Cup qualifiers live in Ireland and have amateur status.

Martens, too, has been able to top up her salary with a string of endorsement deals, the darling of Dutch women’s football recently becoming the female face of Nike at the launch of their new Mercurial football boot.

The winger blushes when the comparisons with her Barcelona clubmate Lionel Messi are floated but, off the pitch, she is beginning to enjoy similar attention from sponsors.

Only Emma Byrne from the Ireland squad, who retired last year after 125 caps, had global companies wanting her onboard for brand promotions. That was a decade ago after her Arsenal side became champions of Europe, something only Megan Campbell and Marie Hourihan can achieve this season with semi-finalists Manchester City. Campbell, however, is sidelined with a serious injury and Hourihan is third-choice goalkeeper.

The closest Irish players come to competing on wages with the Dutch is at Arsenal, where up to six of tonight’s participants play.

Still, it is on the home front that the disparity is most stark. Seven years have passed since the establishment by the FAI of the women’s national league, yet interest from supporters and advertisers continues to be a struggle.

A lack of investment by the governing body, mirroring a trend for the men’s equivalent, has led to stagnation in standards and no definable career path into the professional ranks for prospective talent.

Beyond basic subsistence sums and expenses, home-based players don’t receive any money for participating in the national league.

It would seem the FAI are a long way off developing the type of centralised contract scheme operated by the English Football Association, given it took a threatened strike by players 12 months ago for a mere match fee of €300 to be granted.

That was one movement Ireland’s internationals were ahead of tonight’s opponents in.

It took until two months ago for the Dutch federation to broker agreement with the players’ union on terms and conditions.

Their marquee stars, Martens and Miedema, wanted more for the squad’s lesser lights.

“This is not about having money to buy fancy cars,” reasoned Martens. “It is needed to be able to purchase food in the supermarket.”

1 Gordon D’Arcy: There’s more to Saracens’ success than money
2 Seán Moran: Total disregard for schools as GAA votes one way and acts in another
3 10-man Arsenal show their heart to rescue a point at Chelsea
4 As the UK tightens gambling laws Ireland still lags way behind
5 Naomi Osaka and Coco Gauff set up repeat showdown in Melbourne
Real news has value SUBSCRIBE
Crossword Get access to over 6,000 interactive crosswords