Government to meet with FAI’s bankers after ‘constructive’ Uefa talks 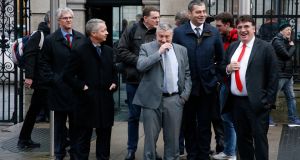 Minister for Sport Shane Ross and a delegation from Government will meet with the Bank of Ireland on Wednesday in what appears to be an effort to persuade the financial institution to provide the backing required by the FAI without the cast-iron guarantees that the company has been seeking.

Ross described Tuesday’s meeting between Government and Uefa officials including general secretary Theodore Theodoridis and financial controller Josef Koller – at which the association was represented by recently appointed chairman of the board, Roy Barrett – as “constructive”.

He also said that all of the stakeholders are “absolutely determined” to resolve the association’s ongoing crisis but insisted that his position on a bailout or guarantee had not changed and that further talks would be required over the coming days.

“Uefa showed an enormous amount of goodwill,” Ross said after the meeting at Government Buildings which went on for around an hour. “They recognised their role as a stakeholder and their commitment there and the future of Irish football.

“I’m not going into details of exactly what they said as it’s very delicate at the moment but you can take it that everybody sees they will have skin in the game here and everybody is united in ensuring there will be a solution that is shared.”

Asked about a timeframe, Ross suggested that the various parties could make substantial progress towards a resolution over the course of this week.

He said that the Government would still not be providing the guarantee for €18 million sought by the association at the start of last month but he and Minister of State Brendan Griffin would make it clear to bank officials that they do not intend to allow the association to end up in examinership of liquidation.

“You’re not going to guarantee absolutely anything at this stage but if you have the four main parties, the stakeholders here, I’m determined that shouldn’t happen and I’m fairly confident the goodwill is there to ensure it doesn’t.

1 Welcome to Iten in Kenya – home of champions and cheats
2 St Michael’s conveyor belt showing no signs of slowing down
3 Premiership Rugby confirms Saracens will be relegated
4 Leinster qualify as top seeds with Benetton win
5 McFarland reflects on a job well done
Real news has value SUBSCRIBE
Crossword Get access to over 6,000 interactive crosswords