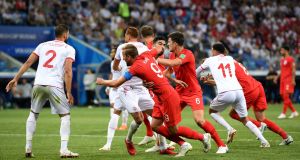 The video assistant referee system is “not fit for purpose” at the World Cup, according to Gary Neville.

England’s dramatic win over Tunisia on Monday had its fair share of VAR controversy, with England being denied what appeared to be two certain penalties as Harry Kane was dragged down in the box.

Neither incident was picked up by VAR officials upon review, prompting widespread criticism of the process.

Speaking on Twitter, former England defender and coach Neville said “it’s not fit for purpose” and added “either give the VAR refs more time and accept the delay OR the broadcasters have to be working with the VAR officials”.

Neville, who is working as a pundit for ITV during the tournament, says blame should not be given to the VAR officials because they simply do not have the time or resource to review decisions correctly.

“VAR going wrong isn’t down to VAR officials. Their are 2 of them in their wading through 26 Angles and having to make a call in maybe 20 seconds ! To give you an idea tv co’s will have 14 experienced people doing the same job to get replays inside 20 secs. It’s an impossible ask!” he said.

Former Premier League referee Mark Halsey believes the system is not ready to be used at such a high-profile event.

He told BBC Radio 5 Live: “We’ve got to look at VAR and the reasons why it’s so inconsistent.

“Personally (I think) it should not be used at the best, most prestigious tournament in the world.

“I think there’s a lot more training and education to be done because it should not be in this tournament.

“They should be looking at it to bring it in for the 2022 qualifying stages and then into the tournament.”

Former England captain Alan Shearer feels Kane may get more joy if he makes his feelings known to the officials.

He told the BBC: “The one small thing I would perhaps say to Harry is ‘moan a bit more, point it out to the referee’. It might just say to the referee to keep an eye on it a bit more.”

Ex-England winger Chris Waddle described the handling of Kane as “embarrassing” and called for referee Wilmar Roldan to “not get another game in the tournament.”