France’s campaign begins in earnest against a solid Swiss side

Didier Deschamps has beautifully balanced French side in a good place 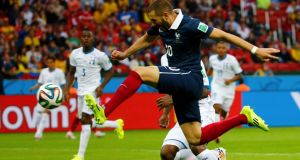 France’s Karim Benzema scores against Honduras during the opening game in Group E.

The history of France in the World Cup is a story of dramatic oscillation. In 1982 and 1986, they reached the semi-finals, then in 1990 and 1994 they did not qualify at all. In 1998 they won it; four years later they got knocked out in the group stage. In 2006 there was another appearance in the final, followed in 2010 by another humiliating group-stage exit.

The pattern suggests that the French are due a good one.

They’ve come to Brazil on a mission of redemption after disgracing themselves at the 2010 World Cup. That unhappy tale started with the controversial play-off victory over the Republic of Ireland that genuinely seemed to embarrass many French fans. It culminated with the abortive revolution of Knysna, in which the players famously refused to train in protest against the coach Raymond Domenech’s expulsion of Nicolas Anelka from the squad.

The gaiety of this World Cup is slightly diminished by the absence of the hapless Domenech, whose finest hour came during a live interview minutes after France got knocked out of Euro 2008 by Italy.

Ignoring hostile questions from the reporter, Domenech simpered into the camera and asked his girlfriend to marry him. She declined. He later admitted it was a mistake to transmit his marriage proposal via the medium of live national television. “Forgive me. It was an error in communication. I felt a moment of humanity when I should have stayed cold and professional.” (Thankfully, they’re still together).

Domenech made many other errors of communication in his time as France manager and eventually he drove most of the players crazy. The French media and public were furious with the Gnysna mutineers but deep down they knew that the manager had not been blameless.

Didier Deschamps has a better way with the players. As Patrice Evra said this week: “Nothing’s ever certain with Deschamps. That’s why I like to work with him. He’ll look you in the eyes and say, ‘Pat, if you mess up I won’t spare you’. I know that if I step out of line I’m out of this team.”

Evra was the ringleader of the mutiny against Domenech and last week, speaking about it for the first time in four years, he claimed “the 2010 World Cup destroyed me. The press transmitted a wrong picture of me, being the bad boy”. In fact Evra’s reputation with the public has not really recovered, but he remains in the team because he’s still France’s best left-back.

France’s first XI is beautifully balanced, as they showed in their 3-0 win against an admittedly sub-par Honduras. In goal they have Spurs’ excellent sweeper-keeper, Hugo Lloris, with Debuchy, Sakho and Varane completing a physically powerful defensive unit. The midfield trio of Yohan Cabaye, Paul Pogba and Blaise Matuidi gives them a formidable blend of tactical intelligence, passing ability, running power, and goalscoring potential.

Up front, Karim Benzema has arrived in Brazil in terrific form, scoring two goals and forcing a third against Honduras. France’s attack also includes the Real Sociedad winger Antoine Griezmann, who is the team’s emerging star, and the tiny Marseille playmaker Mathieu Valbuena, who is the team’s main creative force.

Such is the quality in France’s team that it’s something of a surprise to consider that they are 11 places below Switzerland in Fifa’s world rankings. For most of the last decade the Swiss were dogged, disciplined, tenacious, and deeply boring. That has changed with the introduction of a fresh generation of talented young players, including Granit Xhaka of Borussia Mönchengladbach, Ricardo Rodriguez of Wolfsburg, Josip Drmic of Bayer Leverkusen, and Xherdan “The Power Cube” Shaqiri, of FC Bayern.

It’s plain that these aren’t traditional Swiss names: Xhaka and Shaqiri are of Albanian descent, Rodriguez is Spanish-Chilean, while Drmic’s parents are Croatian. In fact, all four forwards can trace their ancestry to former Yugoslavia.

Switzerland remain solid in defence but these days they typically score two goals in a game, instead of one. After loosening up with that training-style run-out against Honduras, this is where France’s World Cup campaign begins in earnest.