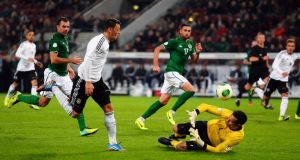 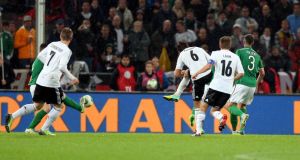 Germany’s Sami Khedira scores the first goal of the game via a deflection off Ireland defender Ciaran Clark in the World Cup qualifier in Cologne. Photograph: Donall Farmer/Inpho

Germany 3 Republic of Ireland 0: Given the scale of last year’s home defeat and the turmoil that has followed since, Noel King and his players might secretly have settled for a scoreline like this before last night’s kick-off.

When Sami Khedira put the locals in front early on it promised to be so much worse and even after Andre Schürrle’s second just short of an hour in it seemed that the Germans might really push on.

As it is, the result will look respectable enough in the history books if last night’s winners have a big World Cup which seems entirely possible. Never mind then that the game was almost as one sided as the drubbing in Dublin.

The visitors might certainly have had a goal with Anthony Stokes enjoying a handful of chances, including one very late on when he was one on one with Manuel Neuer but fired straight at the goalkeeper.

From the resulting corner Ciaran Clark forced another save but within seconds the hosts had broken and Toni Kroos set up Mesut Özil for a goal that the Arsenal man put away almost nonchalantly.

Even after it, however, the Irish can scarcely complain given how many they might have conceded had it not been for a combination of desperate defending, fine goalkeeping from David Forde and, by the standards of the locals, pretty poor finishing.

King will hardly dwell on any of that when he reflects on his night in the limelight in years to come but he can count himself fortunate that there weren’t a few more goals because his efforts to stifle last night’s opponents with what was a surprising team selection and use of players had nothing like the desired effect; something that would have been picked over more had the locals run riot.

His decision to get an extra man into midfield clearly made sense but there were times when it seemed to make very little to the pattern of things. The hosts swept forward from the outset with Özil nominally leading a four-man attacking that also included Thomas Müller, Kroos and Schürrle but there was so much movement that it was difficult for the Irish to be sure where their next problem was coming from.

The plan was to get Glenn Whelan and Kevin Doyle, ostensibly either side of the three behind Anthony Stokes, to carry the burden of picking up the German full backs’ wide runs while the Irish back four remained tight on the edge of the own area, but both seemed to have been asked to contribute towards the centre as well and so kept seeming to get caught between two stools.

Doyle, in particular, struggled on the left with Philipp Lahm, who he consistently arrived late to close down and whose crosses he repeatedly failed to cut out. The result was a succession of scoring chances and one pretty decent looking penalty claim as Whelan ensured that Schürrle didn’t have the chance to meet a cross at the far post.

On the rare occasions King’s men found themselves in possession they clearly tried to pass it a bit, but shifting play out of their half proved a persistent problem.

That was the case when Bastian Schweinsteiger played the ball straight to Darron Gibson deep inside the Irish half, where the Everton midfielder kicked off a passing move that, in that area of the pitch, would have been almost unthinkable under Giovanni Trapattoni. The problem was that he, Séamus Coleman, Marc Wilson and Whelan couldn’t make any forward headway at all between them and so Forde was eventually required to help out.

The goalkeeper was generally outstanding, which was just as well. There was nothing he could have done for the Khedira goal 13 minutes in when Stokes came deep to get involved, gave the ball straight to Lahm and the home side’s skipper promptly found the Real Madrid man whose shot was cruelly deflected by Clark.

Over the half an hour that followed, he made a succession of good saves and one quite brilliant one when Müller cut inside from the right and hit a left-footed shot towards the top corner which he really must have thought would reach its intended destination. Others followed, the best of them from Schweinsteiger late on.

Immediately in front of him there were occasional moments of real quality like Damien Delaney’s perfectly timed tackle on Schürrle after 33 minutes. For the most part, though, it was heavily improvised, often seat of the pants stuff and there were times when the Germans quite simply should have done much better, most memorably when Clark sliced his attempt to clear a Lahm cross and Schweinsteiger made a mess of his attempt to follow home.

One way or another, though, the Irish kept the deficit to one until just short of an hour in and they might even have drawn level just before or after the break with Clark heading off the crossbar and Stokes completely missing his attempt to volley on the follow up in the 45th minute and the Celtic striker firing low just wide early in the 46th.

The most remarkable opportunity for an equaliser came a little later when Whelan’s first time ball over the top tempted Manuel Neuer to come 30 metres off his line only to miss completely. Stokes had to chase a long, long way out to the left before shooting and his effort was way off target. There were other chances but the visitors were never quite good enough to convert one.

Germany’s second, by contrast, was brilliantly finished with Kroos chipping from 25 metres to an unmarked Schürrle barely eight yards out and the Chelsea forward trapped the ball perfectly before turning more than 180 degrees and side-footing past Forde to the bottom right corner.

Perhaps they would have been as ruthless more often had the stakes been higher or the game closer, but the ease with which they almost walked the third in gave a far greater sense of how comfortable they were than the scoreline at the end which came just seconds later.

Rory McIlroy heads for Mexico with ‘WGC slam’ in sight 16:58
Tiger Roll on track for Aintree after solid run in Navan 16:17
Andy Farrell recalls 13 players to Ireland squad ahead of England clash 15:11
Leaving Cert prep forces Beibhinn Parsons out of rest of Six Nations 15:01
Kieren Westwood: ‘I feel obliged to clear my name and defend myself’ 14:01

1 Andy Farrell recalls 13 players to Ireland squad ahead of England clash
2 Tipping Point: Eddie Jones’s rhetoric is out of place in a febrile political climate
3 Eddie Jones continues to revel in putting rugby’s nose out of joint
4 Ireland backrow of O’Mahony, Van der Flier and Stander to be retained against England
5 All in the Game: No Moore medals for Steven Gerrard
Real news has value SUBSCRIBE
Crossword Get access to over 6,000 interactive crosswords