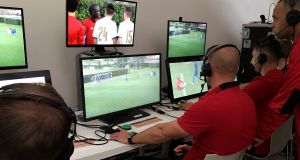 Video assistant referees watch a practice match as they train in the use of the technology ahead of the 2018 World Cup. Photograph: Brian Homewood/Reuters

The selection of the officials, who are all active pitch referees, was based on their experience in using the VAR system which has been trialled in a number of competitions around the world, Fifa said in a statement.

In choosing the officials, Fifa also considered “successful participation in several preparatory seminars and Fifa competitions, where they enhanced their VAR knowledge and skills by using the system”.

The European referees named were Daniele Orsato, Paolo Valeri and Massimiliano Irrati of Italy, Artur Soares Dias and Tiago Martins of Portugal, Bastian Dankert and Felix Zwayer of Germany, Pawel Gil of Poland and Danny Makkelie of the Netherlands.

Serie A, the Bundesliga and the Primeira Liga are among the leagues which have used VAR this season.

The others were Abdulrahman Al Jassim of Qatar, Wilton Sampaio of Brazil, Gery Vargas of Bolivia and Mauro Vigliano of Argentina.

Fifa said some of the previously-selected pitch referees and linesmen would also act as VARs during the tournament in Russia.

The VAR system was approved by soccer’s law-making body IFAB in March after about two years of trials, although there are still concerns that it is not working as smoothly as it should.

Fifa president Gianni Infantino is a strong proponent of the system and says it has been shown to cut the number of mistakes and lift the pressure on match officials.

But critics say decisions are poorly explained to the crowd and have led to goals being disallowed unexpectedly, several minutes after being scored, or penalties being revoked with the ball on the spot and the attacking player ready to take the kick.

The VAR, who sits in a special room with video monitors and is in constant communication with the main match official, checks all decisions which could potentially decide a game.

If a “clear and obvious” mistake is spotted, the incident can be reviewed and changed. The referee, who has access to a pitchside monitor, can also initiate a review himself.