Euro 2016 will use goal-line technology 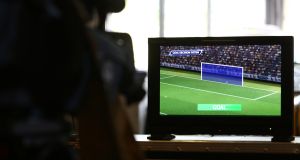 Goal-line technology will be used at Euro 2016 and in the play-off stages of the Champions League from next season. Photograph: Jan Kruger/Getty Images

Goal-line technology will be used to help referees make decisions at the European Championship in France in June, organisers Uefa said on Friday.

It will also be used in the 2016-17 Champions League from the final qualifying round of the preliminary stages.

The system is to be utilised alongside additional assistant referees who will continue to monitor all activity in and around the penalty area.

“The executive committee also decided to look into the feasibility of implementing goal-line technology in the Europa League, from the group stage onwards, starting in the 2017-18 season,” Uefa said in a statement.

Soccer’s rule-makers, the International Football Association Board (Ifab), first approved the use of goal-line technology in 2012.

It was introduced in the English Premier League in the 2013-14 season and was used in the World Cup for the first time in 2014.

Since then there have been an increasing number of calls from players and managers to use video technology in other aspects of the game.

The Ifab will recommend to its AGM in March that trials are begun with a view to the system becoming law in two or three years.