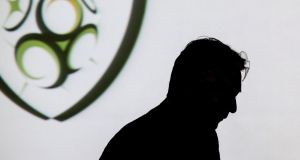 Accounts published by the Football Association of Ireland (FAI) yesterday are a crushing verdict on how the organisation was run, and the picture of the financial health it presented to the outside world.

It is probably the most dramatic and damning set of financial accounts since the financial crisis. How did it happen? What happens next?

The financial reversal is driven by several factors. The FAI has been forced to make a settlement with the Revenue Commissioners – a novel exercise for a tax-exempt body. This was already public knowledge, but yesterday the association confirmed the figure involved. It has told Revenue its estimate is for €2.7 million across the years 2015, 2016, 2017 and 2018. Much of this relates to a PRSI liability for John Delaney’s total pay, which under the terms of his contract would have been significantly higher than was disclosed in previous sets of accounts.

The FAI has also been forced to stump up for professional fees of almost €3.6 million. It has taken a hit of almost €1.7 million on a sponsorship deal with Sports Direct, which was incorrectly classified in the financial accounts. The deal had been previously recognised as revenue, but it became refundable after Sports Direct exercised an option to cancel the deal. Put simply, the FAI was counting money that it didn’t have yet, and then that money failed to materialise.

The accounts also recognise a potential liability to John Delaney of €2.14 million. This was ultimately settled for €462,000, meaning it will get some of that €2.14 million back. In the grand scheme of things, that barely counts as a silver lining in an organisation that is currently being kept alive by handouts from Uefa.

The accounts also reveal that the organisation breached its covenants – the central binding terms of agreement that underpin loans – on €28.2 million of debt. This was brought on due to the true financial picture revealed during the review of the 2017 accounts, and leaves the FAI in the embarrassing position of being in technical default on its loans. The organisation is currently working to refinance this debt – to spread it out over a longer term, with lower repayments. Delaney was happy to boast last year the debt had been brought under €30 million; whether anyone will be happy to refinance it given what has been revealed remains to be seen.

The vast sums Delaney would have been due – almost €3 million over three years – will, and should, stop people dead in their tracks. This figure, which was significantly in excess of his published pay, was arrived at following an internal investigation which found “that certain expenses incurred during 2017 and 2016 by the then chief executive were of a personal nature, and these have been now disclosed as part of director’s emoluments”.

Paul Cooke, the organisation’s executive lead, said yesterday that “in addition to pension payments, loyalty bonuses, there were other payments that would have been paid on behalf of the former chief executive, and items that should have been recognised as benefit-in-kind”. The report also gives an indication of bizarre corporate practices which have been uncovered by the multiple investigations into the FAI which are ongoing.

For example, there were “a number of contracts and transactions where business justification was uncertain and sufficient approvals were not obtained”; “there were no procurement policies or procedures in place”; “the Finance and Audit committees operated with no official terms of reference”; there were no internal audit and compliance functions in the FAI, meaning “a key safety net was absent from the association’s structure”; and there was no policy or protocol regarding business cases, options appraisal or business justifications.

As an aside, the accounts also reveal the generous payments to former men’s team manager and assistant manager Martin O’Neill and Roy Keane, whose severance made up the vast majority of a €1.9 million increase in staff costs during 2018.

The accounts paint such a dire vista that auditors Deloitte – who have, of course, disavowed the work they did on the now-revised sets of accounts – said it was “unable to obtain sufficient audit evidence to support the assumption that the company will continue as a going concern”. Deloitte, of course, can only audit what is put in front of it by the FAI. But it is worth noting that for the period 2016-2018, it charged audit fees of €497,488 to the organisation.

So what happens next? The FAI is losing sponsorship deals and is deprived of grant income. It has been losing cash this year, the accounts state, and it is expected to record another – albeit smaller – loss in 2019. The truth is that it has an enormous financial hole to dig itself out of, and the trust and credibility it needs to begin this work are in short supply.

Shane Ross said yesterday the organisation was on life support – it is hard to disagree with that analysis. The day may come soon when all parties need to have a reckoning on whether, and how, to save this patient.