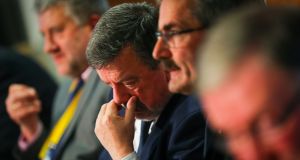 Paul Cooke had warned everyone in advance that they would be shocked by the state of the Football Association of Ireland’s finances, but when he and five of his fellow board members sat slugging copious amounts of water from the bottles placed in front of them, while they waited for Donal Conway to appear, you’d half a notion from the dryness of their palates that ‘shocking’ was putting a gloss on it.

And so it proved.

They’d been just the 22 minutes late for the press conference, Conway arriving six minutes later, which was initially due to be held on Thursday, before being switched to noon on Friday before being put back to 1pm.

A copy of the FAI’s accounts was to be made available to the media prior to the press conference, so informed questions could be put to the top table’s cast of characters, but it wasn’t until after it had started that the reporters were told they could access a PDF showing the accounts on the FAI’s website. The only problem was that the FAI’s wifi wouldn’t allow access to said PDF.

“Could you print it out?”

[the incoming ‘executive lead’ of the FAI who stepped in when John Foley, who was the incoming interim chief executive of the FAI, stepped away on Monday, before it was announced on Friday that Conway was stepping down from his role as FAI president, meaning the search for a permanent replace for John Delaney, chief executive of the FAI from 2004 until he stepped away in 2019, goes on. It has, somewhat unkindly, been pointed out that the FAI has had more heads, or near heads, in 2019 than our national team has had competitive victories]

. . . took to the lectern to present a slideshow of the FAI’s accounts on the big screens surrounding him, he appeared to be struggling to make the display work, the Tech Man hastily summoned to instruct him how to make it all flow.

After initial tetchiness between Tech Man and Non-Tech Man, it did indeed flow, the figures popping up on those screens prompting several dozen of the watching eyes in the audience to nigh on pop out of their sockets.

The FAI had overall liabilities of €55 million.

Auditors Deloitte are, as yet, unable to class the association as a going concern.

And John Delaney’s severance package came to €462,000, including a pension payment.

The most striking moment, perhaps, was when the press officer invited questions from the media after the accounts had been opened up and both Conway and Cooke had addressed the assembled reporters.

There was a brief silence.

Quite literally no one knew where to start.

Delaney’s name was largely notable by its absence, Conway in particular struggling to enunciate the name, opting for “the former CEO” instead. As the RTÉ cameraman noted, Delaney had become Voldemort.

[Quick trip to Wiki: “Voldemort is the archenemy of Harry Potter . . . nearly every witch or wizard dares not utter his name and refers to him instead with such expressions as ‘You-Know-Who’, ‘He Who Must Not Be Named’, or ‘the Dark Lord’.”]

You-Know-Who was, then, the elephantine Voldemort in the room, his July 2018 declaration that the association could be debt-free by 2020 knocking Phillip Franklin, vice-president of the White Star Line, off top spot in the most unfortunate predictions of all time, he being the fella who claimed the Titanic was unsinkable.

Cooke, who bears no responsibility for this debacle, tried to look on the day as a good thing. “Hopefully we can draw a line and move on . . . we’re on a very definite path to reform . . . I would see us being able to push forward from here on . . . this is all in the past, this is the future.”

But when asked about the past impacting on the future of the FAI’s 200-plus employees, he was less buoyant. “There will be consequences,” he conceded, not needing to add that the severance packages for those who might well lose their jobs will be considerably less generous than that received by He Who Must Not Be Named.

The senior men’s and women’s teams would not be impacted, though, he said, so Stephen Kenny and Vera Pauw won’t have to settle for selection boxes instead of a salaries.

The “financials”, Conway admitted, weren’t the best, but the work had started to “steady the ship”.

There was, though, no steadying the Titanic after it hit that iceberg. The SS FAI appears to be sinking just as fast.