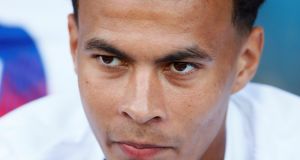 England’s Dele Alli: “We have to be open to change, especially in any way it can help the game as far as possible.” Photograph: Jason Cairnduff/Reuters

Dele Alli has insisted he will not fall foul of new Fifa regulations whereby players can be sanctioned retrospectively during the match in which they are involved at the World Cup.

The new rules, which will work alongside VAR, mean match officials can be made aware of incidents that went unnoticed at the time and the relevant players can face yellow or red cards with on-pitch behaviour to be scrutinised like never before. Referees will have the power to take action at half-time, for example, if they are made aware of an incident from the opening 45 minutes.

Gareth Southgate has already held a meeting with his squad, on the morning of the friendly against Nigeria, to explain the implications of the new regulation and Alli, who has been accused of going to ground too eagerly and has endured disciplinary problems in the past, is confident he will avoid making similar mistakes in Russia.

“I’ve got everything under control,” said the England midfielder, who was banned for one match by Fifa for an obscene gesture apparently directed at his team-mate Kyle Walker during a World Cup qualifier against Slovakia in September last year.

“Every game is different, and you never know what’s going to happen, but that’s not what I’m going to be worrying about. There are a lot more things I need to focus on, and put my concentration on, in a game rather than that.

“We all know football is developing, and we had a couple of games [at Tottenham] where VAR played a part, but we have to be open to change, especially in any way it can help the game as far as possible.”

Southgate has warned his players they must “be vigilant in all areas of the pitch” and suggested there had been tackles in recent games “that would be pulled up and might be yellow or red cards”.

Alli said: “At the World Cup the referees and linesmen are all from a very high level anyway so you are always aware, and it’s part of football. You have to stay concentrated and you can’t do stupid things and if you do, you have to learn from your mistakes.

“That’s just the way it is. I don’t think people will be trying to do bad things, and if they do, and they get punished for it, then it’s your own fault.

“When you’re playing the games, you are focused on trying to help the team as much as you can, so you don’t want to put yourself in a position where you could jeopardise everything and lose the game for your team and your country. I’ll just be myself, the way I always am.

Alli’s involvement in the friendlies against the Netherlands and Italy in March was limited to just 22 minutes in Amsterdam and, with Jesse Lingard having impressed over Southgate’s tenure to date, there had been suggestions the Tottenham player may miss out in the starting line-up this summer.

However, Alex Oxlade-Chamberlain has since succumbed to injury, while Alli and Lingard proved against Nigeria at Wembley that they can thrive together. Ruben Loftus-Cheek will challenge for a starting place but Alli is expected to begin against Tunisia in Volgograd next Monday.

“I wasn’t concerned as such,” said Alli, who featured in all four games at Euro 2016 under Roy Hodgson. “As players, everyone who gets picked for England is used to playing regularly and obviously I was disappointed not to play, but it’s down to me to make sure that if the boss has a decision to make, I put myself in the best possible position to be picked.

“I’ve been working hard in training. You go through a lot of things during the season – ups and downs physically – and on the field you don’t always perform to your full potential. But it was important that I came back hungry to make sure the manager had a decision to make. That’s what I did.”

New date for Tokyo Olympics could be decided this week 09:01
Police investigating after Jack Grealish is pictured at a road incident 08:43
Ken Early on finishing the Premier League season, favourite sporting moments 08:03
New Zealand Rugby forced to cancel lower tier competitions 07:20
Harry Kane: I won’t stay at Tottenham ‘for the sake of it’ 07:39

1 Ken Early: Despite coronavirus, Premier League season must be finished if at all possible
2 Police investigating after Jack Grealish is pictured at a road incident
3 My favourite sporting moment: When Zidane glided through Brazil in 2006
4 ‘Magnificent’ Conor Connelly remembered after sudden death
5 Harry Kane: I won’t stay at Tottenham ‘for the sake of it’
Real news has value SUBSCRIBE
Crossword Get access to over 6,000 interactive crosswords