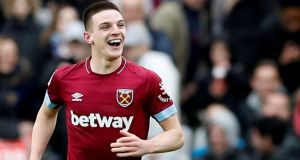 West Ham’s Declan Rice has been named in the England squad for the Euro 2020 qualifiers. Photo: David Klein/Reuters

Declan Rice has been named in England’s squad for the Euro 2020 qualifiers against the Czech Republic and Montenegro after switching allegiance from the Republic of Ireland.

“His form warrants it,” Gareth Southgate said of the West Ham player. “It’s been a well-publicised situation with Declan. We’ve tracked him for quite a while … His form has been excellent. We like what we see.”

The England manager said he believed Rice could play as a midfielder or central defender and added of the 20-year-old: “There aren’t many players of his age playing as well as he is in the Premier League.”

Rice was the only new face in a squad that also includes Jadon Sancho, Callum Wilson and the goalkeeper Tom Heaton, who has been recalled after recovering from injury and regaining his place in the Burnley team.

Southgate gave his backing to Jordan Pickford, saying he hoped the goalkeeper’s poor performance for Everton at Newcastle last weekend was “a blip”. He described Pickford’s England form as excellent but stopped short of guaranteeing the former Sunderland player would continue as first-choice.

“I’m never keen to say this player is number one, because you’ve always got to have competition,” Southgate said. “We’re pleased with what’s Jordan done. Like everybody else, he has to train well and perform well.”

Jesse Lingard and Harry Winks were not deemed ready after injuries, said Southgate, who opted against calling up Southampton’s James Ward-Prowse and Angus Gunn or Crystal Palace’s Aaron Wan-Bissaka.

Gunn, who is coveted by Scotland, and Wan-Bissaka, who has played once for the Democratic Republic of Congo at Under-20 level, are dual-qualified. Southgate said: “I could pick players, give them a cap and stop them playing for someone else but I don’t think that’s right.”

James Tarkowski and Harry Maguire returned to the squad as Lewis Dunk and the injured Joe Gomez dropped out.