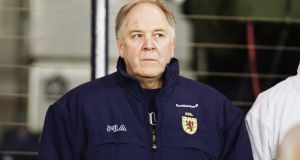 Former Scotland manager Craig Brown believes international football eligibility rules should be tightened. Brown says a team should be represented by players born in that country, or players whose parents are from that country.

Scotland’s longest-ever serving manager was in Dublin as part of McDonald’s FAI Future Football programme and was keen to stress that eligibility rules should also include managers and their coaching staff.

“I personally think the rule should be that you have to be born in Scotland or your parents [should be born there]. it shouldn’t extend to grandparents.”

He also said a team’s backroom staff should be subject to the same criteria. “I’d say the manager’s eligibility has to be the same as the players’ – and the physio’s, the doctor’s and so on,” the 74-year-old said.

Ireland have a long history of making the most of the “granny rule” and the issue was given much air-time before the meeting with Scotland last November.

James McCarthy and Aiden McGeady are both Scots who have decided to play for Ireland and, going by Brown’s criteria, would not have been allowed to do so as both are third-generation Irishmen.

“I would have wanted them [McCarthy and McGeady] to play for Scotland, but the rules are the rules and you have to use the rules to your advantage.

Brown is serving as a non-executive director at Aberdeen and, as a keen viewer in Glasgow last November, was impressed with an often overlooked aspect of team preparation.

“What really impressed me in Scotland was their [Ireland’s] warm-up. I noticed that during the game, when substitutes were sent out to warm-up, they were supervised.”

Such peripheral areas of preparation have come increasingly under focus since Martin O’Neill’s took charge, with Ruud Dokter appointed as high performance director two years ago.

Such a role is very much a modern phenomenon but Brown recalls that, during his time as Scotland manager, O’Neill was very keen on player conditioning at Celtic.

1 Getting behind the rotten core of rugby with Dan Tuohy
2 Irish squad in the dark as clouds hang over Six Nations
3 Ryan Baird scores a hat-trick as blue wave rolls over Glasgow
4 Football fan survey: Manchester United still top the league among Irish fans
5 Football fan survey: Almost half of Irish adults say they support a club
Real news has value SUBSCRIBE
Crossword Get access to over 6,000 interactive crosswords