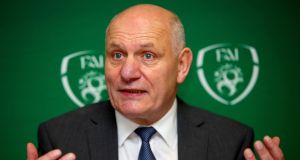 Former army officer Gerry McAnaney has said he hopes to play his part in making the FAI a more transparent organisation by getting out to clubs, leagues and the association’s other affiliates, in order to keep the grassroots game informed of the current state of affairs, as well as how things are changing around Abbotstown.

The 61-year-old, who has been involved with the game since playing in goal for Ireland at schoolboy level (where he played in teams that included the likes of Dave O’leary and Ashley Grimes), beat Sligo Rovers chairman Martin Heraghty by 88 votes to 40 at the association’s EGM in Blanchardstown on Saturday.

McAnaney, a Council member representing the Defence Forces for almost 20 years but now a member on behalf of the Football For All sector, said he was surprised by the margin of a victory that was secured in no small part due to the backing of key elements of the schoolboy and junior games.

He described his election as “a huge honour” and said that he wanted to restore the link between the association’s offices in Dublin and the grassroots all over the country that the president traditionally provided before the office was sidelined to an extent by John Delaney.

“One of the greatest things that I can offer is communication,” he said. “To get out to all the levels of the game and let people know where we are at. The role of the president is to get out and spread the gospel of the FAI.”

He admitted, however, that having not been involved at board level in recent times he not actually aware of the precise financial situation at the association, although he hopes to address that in the coming days.

Pressed about his long service on Council which has been criticised for its failure to do more to hold Delaney to account during his decade and a half as chief executive, he said that he had, like many others who fell out of favour with the leadership, simply resolved to contribute what he could while opposing the changes designed to centralise power with the organisation.

“I had my concerns,” he said, “and any time I had concerns about governance I made those known to the people I represented and I wouldn’t have voted for certain changes that were made to the way the association was doing these things.”

Asked for an example of the changes he had opposed, he said that he had voted against the raising of age limits for board members, a move championed by Delaney with the express intention of keeping key allies Eddie Murray and Michael Cody, then honorary treasurer and secretary respectively, in their positions.

He succeeds Donal Conway in the position, which he will only hold until July when it will be up for election again, and said that he accepts that his predecessor “did not sign up for everything that landed in his lap”.

Conway, he said, had told him that he had been misled by Delaney and “if he says he wasn’t fully informed then I have no reason whatsoever to doubt that”.

He says he believes the current leadership of the association has a good case to make to the government as it seeks the backing required to get through the current crisis then build back up again, and he suggested that there is strong underlying support for football in political circles: “I’d be delighted to talk to them about it. I think it will be an easy conversation to start.”