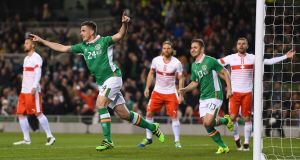 Ciaran Clark celebrates his early goal for the Republic of Ireland in the friendly international against Switzerland at the Aviva Stadium. Photograph: Shaun Botterill/Getty Images

After all the talk about the possibility of Euro2016 games having to be played behind closed doors, perhaps it might be time we had a mature conversation about doing it off our own bat with these pre-tournament friendlies.

This one actually began brightly enough and Martin O’Neill will have come away happy that a few of the boxes he was looking to tick have now been taken care of. The loss of Kevin Doyle to an ankle injury midway through the opening half was a setback for the manager, though, and a potentially devastating blow for the player.

It was little wonder that nobody on either side looked overly anxious to take too many risks after seeing the former Wolves striker carried away in considerable pain and as the life steadily seeped out of the contest over the course of a disjointed second half, a fair few amongst a crowd officially put at 35,450 must have been willing it to be all over.

Doyle had been one of the players given chances to make their cases for European Championship inclusion from the outset with Alan Judge and Shane Duffy also handed starts before Eunan O’Kane and Jonny Hayes got on after the break to bring the tally of debuts on the night to three.

Most of those with something to prove did well for the most part, although Ciaran Clark was probably the night’s biggest winner thanks to an assured performance and the night’s only goal. Darren Randolph seemed to gently tighten his grip on the goalkeeper’s jersey too, one suspects, without ever having anything spectacular to do.

Ireland got the sort of start they would pay handsomely for in a match that mattered with the second of two quick corners in the opening minutes met well by Duffy whose initial header was then nudged beyond Yann Sommer by Clark from just three or four yards out.

Perhaps the game would have needed the goal, it was impossible to tell it came so early on, less than three minutes in but it certainly did it no harm for the next 20 or so with Ireland energised, it seemed, and the Swiss stung into some sort attempt to haul themselves back onto level terms.

Brady’s set pieces, as with the corner that yielded the goal, proved a recurring problem for the visitors, and the hosts mixed up the corners particularly well with Doyle going close to scoring from one when he stole a yard on his marker as he came to beyond the near post, then produced a first time flick that Ricardo Rodriguez had to block on the line.

The Wexfordman put himself about well, chasing down opponents and looking all the time for the chance to break into open space but his night was ended prematurely just as he looked to have done both to good effect.

The striker caught Timm Klose in possession and won the ball cleanly but as he started to take off after it, the defender lunged late and high in an attempt to retrieve the situation. There may not have been too much intend involved but it was a bad challenge and the Irishman was signalling to come off before he eventually went down. After Daryl Murphy replaced him he was taken to hospital to make sure that the badly gashed ankle had not also been broken.

Perhaps the incident alerted everyone else to the dangers of over exuberance in what was, of course, a low stakes game but whatever the reason, it never seemed to rediscover its previous tempo after the injury.

There were a handful of standout moments before the break with the generally impressive Judge going close to scoring with a header that Sommer seemed to know little enough about and Shane Long clattering the underside of the bar with one when really he probably should have scored.

At the other end, Brady played himself and his team-mates into trouble with a terribly ill-thought clearance then got out of jail when the beneficiary of his error, Blerim Dzemaili, went down ridiculously easily as he tried to go past the Dubliner.

The Swiss produced a handful of half chances between then and the end of the game but Randolph coped well, even if he was a little lucky late on when a shot by Shani Tarashaj took a deflection off Breel Embolo and skipped just wide of the post with the goalkeeper looking pretty helpless.

Both of Ireland’s holding midfielders, Stephen Quinn and David Meyler, were amongst those to be replaced as the half wore on and Murphy made away again, perhaps on the basis of some injury. Of those to arrive on, O’Kane had the best chance late on to make his mark when he did well to anticipate an error by Gelson Fernandes but then fired a yard wide when attempting to curl the ball into the bottom right corner.

He seemed to do enough, in any case, to earn a second audition and may well reappear when Ireland look to further extend their unbeaten home run on Tuesday night when Slovakia provide the opposition. They beat the Swiss 3-2 in November. Time to start believing that that will be the all action pre-tournament friendly we have really all been waiting for.