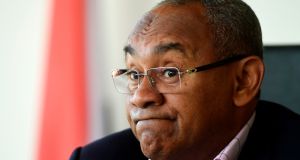 The Fifa vice-president Ahmad Ahmad has been detained and questioned by French authorities in Paris, a day before the start of the Women’s World Cup.

Mr Ahmad is “being questioned by the French authorities in relation to allegations related to his mandate” as president of the African Football Confederation, Fifa said in a statement.

“Fifa is unaware of the details surrounding this investigation and is therefore not in a position to make any comment on it specifically,” the governing body said.

“Fifa is asking the French authorities for any information that might be relevant to investigations taking place within its ethics committee.”

African news outlet Jeune Afrique first reported that Ahmad, who is from Madagascar, had been detained on Thursday as part of a corruption investigation.

Ahmad has been accused by former Confederation of African Football (CAF) secretary general Amr Fahmy of bribing heads of football associations and misusing hundreds of thousands of dollars.

Fifa president Gianni Infantino touched on problems in CAF in an address to the continent’s football associations on Tuesday.

“I know there is a certain amount of turbulence,” Mr Infantino said.

“I would urge you at this difficult point to urge you to always keep your cool and keep the spirit of solidarity. Try to find solutions, not problems.”

Fifa has struggled to move on from the corruption crisis that erupted with officials being arrested in May 2015.

That message was repeated in a Fifa statement about Mr Ahmad being questioned in the French investigation.

“Fifa is fully committed to eradicating all forms of wrongdoing at any level in football,” the governing body said.

“Anyone found to have committed illicit or illegal acts has no place in football.

“Fifa is now clean from the scandals that tarnished its reputation.”

1 Betting shops face uncertain future as they prepare for Monday reopening
2 Tianna Bartoletta: ‘After you’ve gotten your medal, you become black in America again’
3 Timo Werner giving up on Liverpool dream on path to being truly wanted
4 Sports bodies must keep electronic records of participants as training sessions resume
5 Mature Ringrose keeping the ups and downs of rugby life in perspective
Real news has value SUBSCRIBE
Crossword Get access to over 6,000 interactive crosswords