Shane Duffy: Denmark will face a different Ireland this time

Change of style under Mick McCarthy could pose a problem for Denmark, says defender 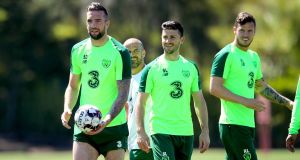 Shane Duffy, Shane Long and Kevin Long at Republic of Ireland squad training in Quinto do Lago, Portugal in May. Photograph: Ryan Byrne/Inpho

Shane Duffy believes that Ireland can continue to improve over the course of this campaign as they get to grips with the brand of football Mick McCarthy is looking to have the team play. But the big defender feels the very fact that they are doing things a little differently will be a boost against Denmark.

The Derry man, who travelled to Copenhagen with the rest of the Ireland squad on Wednesday ahead of Friday’s game at the Parken stadium, is wary of the lingering notion that the team should be seeking revenge this Friday in Copenhagen. But he does feel the change of style might just pose an unexpected problem or two for Åge Hareide and co.

“I think they’re going to expect a different approach from us this time,” he insists. “They know that something new always comes out of having a change of manager.

“They’ll probably think it’s not going to be the same as the last four games. They’ll be aware too that we’re off two wins in a row. And you know if you get an Irish team strong together they’ll be hard to beat. Sometimes it won’t be pretty out there and we’ll have to defend well, but if we get our moments and make the most of them, that’s what we’ve got to try and do: go out there, be positive and bring it to them.”

He is, he says, more than happy himself with the collective attempt to play a more fluid brand of football.

“I’m comfortable getting the ball at the back. Obviously you want to overdo it because if you get caught you can concede and suddenly you’re two down and it’s over, but if it’s on to play, to build up that way, then I think every footballer wants to do that. So, yeah, you’ve just got to pick and choose the right time and you have to have players who want the ball, but that’s what we have got to work towards.”

Duffy recalls the 5-1 defeat in Dublin 18 months ago as one of the worst nights of his life, a collective setback that cast a shadow over the year that followed but, he says, you have to take experience and then say “don’t let that happen again”.

“You have to learn from those nights,” he says. “Every footballer goes through tough periods and that was a tough period for us. It sort of carried into the next campaign where it killed us for a while, but hopefully it’s a new fresh start now. You get back that winning mentality because when you have it, you keep believing that you can beat anyone and that’s what we’ve got to believe.”

It is a sense that seemed to desert Duffy and his Brighton team-mates for spells this season. The players showed what they might be capable of on good days in their second game of the campaign, a 3-2 defeat of Manchester United, but there were far too many disappointing displays over the months that followed, and narrowly avoiding the drop ultimately wasn’t enough to save Chris Hughton’s job at the club.

“I was disappointed, that’s all I can say, really,” he says, clearly struggling slightly with divided loyalties. “It was obviously the club’s decision, but I thought he left the club in a good place; he got it to where it is now.

“He was great for my career, he has improved me as a player – and off the pitch, as well, he has been huge for me. He is sort of a father figure, where if you are having a bad time off the pitch, you can go to him and he’ll talk to you and help you. If your form’s not there, he’ll help you.

“He’s brilliant. But that’s football; there are tough decisions to be made in the game and hopefully we push on and try to do better than the last six months.”

Duffy believes his own season was not too bad. The 27-year-old made 40 club appearances, and his partnership with Lewis Dunk played a fairly central role in ensuring things weren’t much worse for the wider team. He also managed to achieve his pre-season target of scoring five goals (four them having a positive impact on the game’s result), something he hopes to better again next year.

“I just feel if we get free kicks and corners that I can score. We just ended up getting a lot of them. But we have good strikers here [with Ireland], good attackers and good wingers. Against Georgia we could have had more than one goal. Being an attacker is not my job, but if I can get my clean sheets we can progress and hopefully that’s what I’m in the team for, but if I can add a few goals here too I’ll be happy.”

1 How do Klopp’s Liverpool measure up against greats of past?
2 Welcome to Iten in Kenya – home of champions and cheats
3 Saracens to accept second 35-point deduction and effective relegation
4 Johnny Sexton confirmed as new Ireland captain for Six Nations
5 Gerry Thornley: Farrell’s Six Nations squad hints at more fluid selection policy
Real news has value SUBSCRIBE
Crossword Get access to over 6,000 interactive crosswords