Former Burnley, Bolton and Wigan manager has been out of work for two months 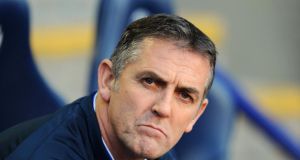 Coyle replaces Dominic Kinnear, who had been the only manager Houston had ever known but left at the end of the season to join San Jose.

“It is nice to be wanted by a fantastic club and I feel we have a great opportunity to put a team on the pitch that is pleasing on the eye and can win games,” Coyle told reporters. “I’ve been watching Houston Dynamo for many years and I know the atmosphere of the supporters.

“The league is thriving and the opportunity to join a big club like the Dynamo is very exciting for me.”

Coyle guided Burnley to promotion to the Premier League in 2009 but left the club midway through the following season to join Bolton Wanderers, where he had played as a striker.

After Bolton were relegated and struggled to launch a promotion campaign back to the top flight, Coyle was sacked on October 12th.

The 48-year-old then had a short spell as manager of Wigan Athletic in the second tier Championship.

Meanwhile former club Bolton have been buoyed by the return of veteran striker Eidur Gudjohnsen. The 36-year-old has returned “home” 14 years after he last played for Wanderers.

Gudjohnsen certainly embarked on an upward trajectory when he left Bolton in 2000, enjoying trophy-laden spells at Chelsea and Barcelona, but he has failed to settle since despite playing in France, England, Greece and Belgium.

Yet the forward, who penned a deal with Bolton until the end of the season last Friday, is optimistic that he can rekindle some of the old magic now he is back in familiar surroundings at the Macron Stadium.

“Injuries came into play and in certain situations in the latter stages of my career I’ve found it difficult at times to settle in at clubs that I’ve been to,” he said.

“Whether it’s been adapting to the style of play, or the surroundings — it just hasn’t worked out at times.

“I feel like I’ve been here for a couple of years already because it feels like home.

“Now it’s just a matter of me being hard on myself in the next few weeks and being as ready as I can when called upon.”

Manager Neil Lennon’s other attacking options lack experience and the duo of Gudjohnsen and other new signing Emile Heskey have 140 international caps between them.

“And about 100 years together as well,” Gudjohnsen joked.

“He’s a physical presence and you can still see it; there’s not much changed in him. If he wants to play and if he’s hungry to play then I’d love for him to be with us.

“Any bit of quality, any bit of experience, any bit of competition within the group is always helpful and whether it’s him or other players, we want to find a healthy competition to get the best out of each other.”