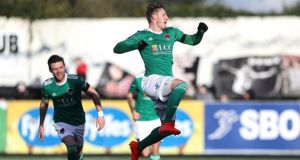 The new League of Ireland season kicked off with a bang at Oriel Park on Sunday afternoon as Cork City stormed to their third successive President’s Cup final win over Dundalk.

Ronan Murray’s first half double looked set to give Dundalk their first victory over the Leesiders since October 2016.

However, the reigning champions produced a scintillating second half display with Karl Sheppard and Barry McNamee drawing them level by the hour mark.

Kieran Sadlier’s wonder strike put them ahead and Dundalk’s capitulation was summed up when Graham Cummins headed home a Sadlier cross with nine minutes to play.

The day began on a poignant note with Oriel Park falling silent to remember former Cork City midfielder Liam Miller who sadly lost his battle with cancer on Friday night.

Both clubs made significant changes over the winter months, highlighted by the fact that 12 of the players on show didn’t start the FAI Cup final meeting between the sides last November.

The heavy snow that subsided before kick-off returned as the game got underway and Dundalk deservedly pulled in front in the 19th minute. Michael Duffy’s ball in from the left wasn’t cleared and Murray was on hand to skim the ball into the far corner.

The former Galway United man did more damage five minutes before the break, collecting a ball from the left again to lift a close range effort over Peter Cherrie from close range.

John Caulfield reacted by making a double substitution at the break and one of those introduced, Karl Sheppard, hauled the visitors back into it when he pounced on a mix-up between Chris Shields and Gary Rogers in the 49th minute.

New recruit McNamee made it 2-2 nine minutes later when he headed home a Sadlier cross from the left and Oriel Park was stunned when Sadlier himself rifled an unstoppable effort into the top corner of Rogers’ net with 11 minutes to play.

Dundalk never looked like getting back into things and Cork extended their unbeaten run over Stephen Kenny’s side to seven games thanks to Cummins’ near post header to seal a victory that suggests they will still be the team to beat in 2018.

1 Gordon D'Arcy: I know what Joe and Cheika would do. Fix the basics
2 Darragh Ó Sé: Cork and Donegal went out with the wrong attitude
3 Simon Easterby admits Ireland may need to take new line on maul
4 Can Solskjaer’s Man United find their groove when it matters?
5 Dundalk’s Jordan Flores on the shortlist for Fifa Puskas award
Real news has value SUBSCRIBE
Crossword Get access to over 6,000 interactive crosswords