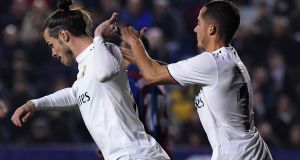 Cristiano Ronaldo was notorious during his time at Real Madrid for not congratulating his teammates when they scored. Gareth Bale – who was signed by Real Madrid’s president Florentino Pérez in 2013 with a view to succeeding Ronaldo as the team’s leader – has an interesting take on celebrations of his own goals. He refuses to accept his teammates’ congratulations.

On Sunday night, Real Madrid scraped a 2-1 away win over Levante. The game was tied 1-1 when Bale was introduced as a substitute. He was in a huff. He’s been unable to regain a starting position in the team since returning from injury – his 23rd during his career at Real Madrid – a month ago. To add insult to injury, he was head coach Santiago Solari’s second choice as a sub for the game against Levante – Solari sent on a youth team graduate Fede Valverde before him.

Bale was only on the pitch two minutes when Real Madrid were awarded a penalty, the team’s second in the game. Karim Benzema, who scored Real Madrid’s first penalty, had been withdrawn. The team’s regular penalty taker, Sergio Ramos, missed the match because of suspension. Bale took the spot kick and scored, sending Levante’s goalkeeper the wrong way. As Bale turned and jogged back to his own half, he shrugged off Lucas Vazquez when he attempted to embrace him. The surly image was used by both of Madrid’s sports newspapers, Marca and Diario AS, for its front pages on Monday. It was “an ugly gesture,” commented Marca.

Bale is a problem for Real Madrid. He was supposed to come into his kingdom this season. It hasn’t happened. In last year’s Champions League final, he scored a bicycle kick – arguably the greatest goal in the tournament’s history – that changed the course of Real Madrid’s history. The goal – along with his second several minutes afterwards which helped defeat Liverpool 3-1 – secured Real Madrid its 13th European Cup.

It also set in motion a chain reaction. Bale – who had been injured and out of favour with his coach Zinedine Zidane for most of the season – was on the verge of leaving the club. His heroics in the final bought him extra credit, though. He was persuaded to stay by Pérez. Zidane wanted to hold onto Ronaldo instead. Pérez disagreed. Zidane resigned. Ronaldo followed him out the door a few weeks later.

Bale has failed this season to take a step up. He has again struggled with injury. He has been unable to match Ronaldo’s prodigious scoring record. He is unpopular with fans. In January, Real Madrid went down 2-0 at the Santiago Bernabéu to Real Sociedad in LaLiga. The injured Bale was watching the game from the stands. He left his seat when the score was 1-0. With 78 minutes on the clock, he was caught on camera by El Chiringuito de Jugones, which is a nightly football debate show, fleeing the stadium in his car. The optics were awful. Where was the solidarity with his teammates?

After more than five years at the club, Bale has become a study in isolation. His teammates call him “the golfer”, which hints at his priorities. He sits out team dinners because he has to be in bed by 11pm. Only schoolchildren in Madrid go to sleep before midnight. He doesn’t speak Spanish, which adds to his detachment. His teammate Marcelo says he communicates with him through gestures.

Bale is, however, important to Real Madrid’s fortunes. He has goals, as they say in Spain. Despite the ravages of injury, he has scored over 100 times for the club. The player who is keeping him out of the team – Vínicius Júnior – is a breath of fresh air. He plays with a smile on his face. He’s only 18-years-old, and has yet to earn his first cap for the Brazil national team. He’s direct. He’s dangerous. He dovetails well with Benzema. He doesn’t score often enough though. He has only four goals in 25 games for Real Madrid.

Solari believes in the teenager, who was signed by Real Madrid from Flamengo when he was 16-years-old for a reported fee of €46 million. Solari has surprised since taking over the job as head coach, following the dismissal of Julen Lopetegui after a 5-1 drubbing in a league Clásico against Barcelona in October. Solari is a man of conviction. He got the job, ostensibly on a caretaker basis until the end of the season, having worked for several seasons in the club’s youth academy.

Most coaches in his position try to go unnoticed. The boldness of his decisions show that he wants the job for longer. He’s unafraid of reputation. He hasn’t started Isco – the golden child of Spanish football, and a player who is nicknamed “Magic” by his teammates in the Real Madrid dressing room – in a league game since taking charge. The pair aren’t speaking to each other. He’s dropped Casemiro for games, which has helped to revive the career of Marcos Llorente.

Marcelo has also been out of favour. He has always been a flaky defender, but the X-Factor he provides in attack has compensated for his defensive frailties. During Lopetegui’s reign, for example, he had a hand in 10 of the team’s 17 goals. His defensive errors became too galling a sight for the pragmatic Solari, though. Solari is also bothered by his lack of fitness. A Spanish TV report in January leaked news that Marcelo was 7kg overweight. A player from the club’s youth academy, Sergio Reguilon, has taken his place in Solari’s starting XI.

Marcelo’s lack of form has been symptomatic of Real Madrid’s malaise this season. The team, which has won four of the last five Champions League titles, has been sated with success. It lacks drive. It can’t lift itself for domestic games. Real once inspired fear. Now Spain’s smaller clubs relish taking a cut at Los Blancos. They have lost to teams like Girona – whose budget spend is about six per cent of Real Madrid’s – and Eibar this season. They got whipped 3-0 by Eibar.

Real Madrid’s troubles are structural. They haven’t replaced Ronaldo, who guaranteed 50 goals a season over nine years. They have failed to regenerate the squad. Over the last five seasons, they have made a net profit of €18.7 million on transfers, frugality that is unheard of in the business dealings of Europe’s biggest clubs. Barcelona, for example, spent €807.7 million on buying players during this period, more than twice the outlay of Real Madrid.

This season’s struggles are a mirror image of what happened last year when they finished 17 points adrift of Barcelona in the league. They are still alive in the Champions League, though, a competition an ageing group of players have a knack of peaking for. This week will tell a lot. They face Barcelona on Wednesday night in the second leg of Spain’s cup competition, the Copa del Rey, at the Bernabéu. The tie is finely balanced at 1-1. Three days later the sides meet again in the league.

Real Madrid, who trail Barcelona by nine points, must win to keep the title race alive. Solari may well turn to a disgruntled Bale to dig them out.

Coutinho - A man out of sorts

Philippe Coutinho arrived at Barcelona a little over a year ago to much fanfare. His old mate Luis Suárez picked him up at the airport. It was a nice touch. It augured well. After a lengthy transfer saga with Liverpool, the club had finally got their man. At a cost. His fee, which reportedly could rise to €160 million with add-ons, was the most expensive in the club’s history. It still is, and it isn’t working out.

Coutinho started brightly. He netted 10 goals and provided several assists in 22 games during the second half of last season. But the wheels have come off. He’s lost his mojo. He picked up an injury in a Champions League group game against Inter Milan in November and has been unable to get his place back on Ernesto Valverde’s starting XI, losing out to Ousmane Dembélé, who has been in electric form. Coutinho was given a rare start at the weekend against Sevilla in a league tie, but was replaced in the second half, having lost possession 10 times.

The Brazilian was signed with a view to replacing Andrés Iniesta, but he doesn’t fit in midfield. Neither does he work further up the field. His problem is that Barcelona don’t have room for two number 10s. Leo Messi fills that role for the team. The Camp Nou is a forbidding theatre. It savages its own players. André Gomes, who is now at Everton, said he endured “hell” during his two years at the club. Cesc Fàbregas didn’t work out either when he returned to Barça in 2012. More careers end in failure than success at the club. Coutinho’s is in the balance. He has work to do to salvage his reputation in Catalonia.