FAI Cup: Bluebell on a win-win as they head for Tallaght 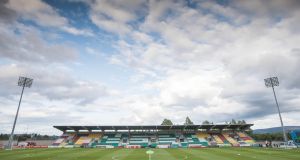 “I was at the Ireland-Serbia game with my kids and around the pitch were the signs for Bluebell v Shamrock Rovers and it was brilliant,” said Noonan, manager of the only non-league side left in the competition.

“The kids couldn’t believe it, so that all adds to the occasion for me and the club as well.”

And Rovers fan Noonan says the only pressure on his side is that they turn up.

“It’s win-win for me,” admitted Noonan whose company has three season-ticket seats at the ground.

“Listen, we’re expecting to turn up and play Shamrock Rovers. Are we expected to beat them? No, probably not, but we’re going to give it a go” added Noonan. He can call on former FAI Cup winners Mark Rooney and Robert Bayly, though ex-Ireland midfielder Keith Fahey, who also has a cup winner’s medal, is suspended having been sent off in their win over First Division Cabinteely in the last round.

A similar indiscretion in their victory over Shelbourne means Rovers’ captain Ronan Finn is also banned while manager Stephen Bradley is without the injured Graham Burke and Luke Byrne. Trevor Clarke and Gary Shaw need to prove their fitness.

Injury rules Dundalk left back Dane Massey, captain Stephen O’Donnell, and fellow midfielder John Mountney out of the side for their home tie with Drogheda United in a Louth derby, though Jamie McGrath returns after appendicitis.

Bottom of the Premier Division, Drogheda are without suspended striker Chris Mulhall while Brennan brothers, Seán and Gavin, along with defenders Ciarán McGuigan and Colm Deasy are out injured.

Limerick bring a full squad to Galway United for the other all Premier Division clash.

Galway have captain and right back Colm Horgan returning from suspension while manager Shane Keegan is hopeful that midfielder Rory Hale (back) and central defender Stephen Folan (dead leg) will be passed fit.