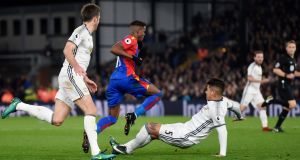 Manchester United defender Marcos Rojo’s two-footed lunge at Wilfried Zaha yielded a yellow card but many considered that to be too lenient for such a dangerous tackle. Photograph: Tony O’Brien/Reuters

Zlatan Ibrahimovic and Marcos Rojo have escaped retrospective punishment from the Football Association after incidents in Manchester United’s 2-1 victory at Crystal Palace on Wednesday.

Referee Craig Pawson gave Rojo a yellow card for his aggressive, two-footed lunge at Wilfried Zaha during the first half at Selhurst Park.

Many observers considered that to be too lenient for such a dangerous tackle, particularly as it came 10 days after a similar challenge on Everton’s Idrissa Gueye – but the FA cannot increase the punishment for offences which have been seen and dealt with by the match officials.

Ibrahimovic’s apparent elbow to the face of Yohan Cabaye, however, could have been sanctioned by the FA, as it was not seen at the time.

But, as is standard in these cases, footage of the second-half incident was sent to three former elite referees who reviewed it independently of each other.

For the FA to take action, the referees must be unanimous on the need for a retrospective red card and in this case they did not agree.

The governing body on Thursday published its reasons for giving United manager Jose Mourinho a one-match touchline ban for kicking a bottle of water in anger during a game against West Ham last month.

The ban, which Mourinho has already served, was dished out because a three-man disciplinary commission decided he could have “endangered people around him”.

The commission’s report also revealed that the Portuguese manager made a “sincere apology for his actions” and said he is “striving to improve his disciplinary record”.

As well as being forced to watch a game from the stands, Mourinho was fined £16,000.