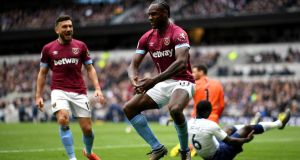 West Ham became the first opposition team to win at Tottenham’s new stadium after a Michail Antonio goal gave them a 1-0 victory.

Spurs had not conceded a goal in their previous four games at their new home, but Antonio’s second-half strike proved the difference between the two sides.

Mauricio Pochettino’s men looked lethargic and lacked spark and the boss will know much better will be required when Ajax visit the Tottenham Hotspur Stadium in the Champions League semi-final first leg on Tuesday.

Defeat – which is their 12th of the season – throws the race for third and fourth place wide open with Chelsea, Arsenal and Manchester United all in the mix.

For West Ham, who were also the first away team to win at the Emirates Stadium back in 2007, not only do they put their names in the history books, they also end an away drought in the Premier League that stretched back to December.

In the end Manuel Pellegrini’s men could have won far more comfortably as Hugo Lloris was forced to save from Marko Arnautovic, Antonio and Angelo Ogbonna in the final 10 minutes.

Spurs’ frustrating afternoon is perhaps no surprise given their packed fixture schedule and lengthy injury list, but things started off promisingly for them.

They were forced to contend with an 11-man defence during their 1-0 win over Brighton on Tuesday, but this game was immediately more open and the hosts found plenty of space in the opening 15 minutes.

They had joy getting in down the channels and twice created opportunities to break the deadlock.

First Dele Alli sliced the West Ham defence open to set Son Heung-min through on goal, but the South Korean’s first touch took him wide and Lucasz Fabianski was able to save his low shot before Alli was sent clear by Christian Eriksen and his goalbound shot was blocked.

West Ham were finding opportunities too and Felipe Anderson should have done better with his shot having got in down the left, but it was weak and straight at Lloris.

But Spurs controlled the opening 45 minutes and Moura and Son’s partnership in attack was proving fruitful as the pair combined well for the latter to have a shot blocked on the edge of the area, before Moura whistled a low shot just wide of the post.

More good work from the Brazilian saw him create Tottenham’s best chance as he rampaged down the right and after Spurs won the ball back it fell to Eriksen, but Fabianski did well to block the shot from close range.

But the second half was where it all fell apart for Spurs and the tone was set by West Ham’s fast start, where they enjoyed a period of pressure.

Tottenham were able to ride the storm and assumed brief control as Alli raced through on goal twice, but chose the wrong option on both occasions, while Son thought he had a penalty after Antonio blocked his cut back in a goalscoring position.

But they were lacking any sort of composure or cohesion going forward and West Ham took the lead in the 67th minute with a fine finish.

Antonio positioned himself in between the two central defenders and was picked out by Arnautovic before firing emphatically into the far corner.

It was his seventh goal of the season and he will go down as the first opposition player to score a goal at Tottenham’s new home.

He could have been joined on the scoresheet by several of his team-mates as the Hammers picked holes in the Spurs defence, with Arnautovic and Ogbonna both testing Lloris late on.

Spurs almost stole a point right at the death but Vincent Janssen’s header was cleared off the line by Fabian Balbuena and West Ham claimed all three points.