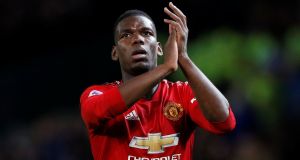 Manchester United’s Paul Pogba could be in line for a return to Juventus. Photo: Phil Noble/Reuters

Juventus would like to sign Paul Pogba from Manchester United this summer but would have to sell two or three important players to be able to afford the Frenchman. United are likely to demand €130m for the 26-year-old.

United want to keep the World Cup winner but his second spell at the club has not been a success so far. The midfielder may look to leave in the summer, especially if Ole Gunnar Solskjær’s side miss out on a Champions League place for next season.

Pogba spent four years at Juventus between 2012 and 2016 – and won the Serie A title in each of those seasons. The Italian club would like to make him their second landmark signing in two years after capturing Cristiano Ronaldo €100m last summer.

However, the purchase of Ronaldo means that the club would have to offload several players in order to sign Pogba, with the likes of Miralem Pjanic and Douglas Costa among those who may have to leave.

Juventus recently met with Pogba’s agent, Mino Raiola, to discuss signing the young Flamengo full-back Wesley, as well as a new contract for another of Raiola’s clients, Moise Kean.

The Italian champions also informed Raiola that they are looking into the possibility of re-signing Pogba, and the two parties agreed to keep discussing a potential deal in the coming months.

On Friday, Solskjær said he expects Pogba to be at Old Trafford next season: “You can’t guarantee anything in football but yes I think Paul’s going to be here. He’s very determined to succeed at Manchester United.”

“We want him to do well, he’s a leader in that dressing room and on the pitch for us and if I can guarantee [him being here] I would say yes I can guarantee. But in life you can never, but he will be here as far as I’m concerned.”

Real Madrid are also interested in Pogba but United have yet to receive an offer from the Spanish club for a player who cost them £93.2m in 2016. – Guardian

1 Ireland 23 Georgia 10: How the Irish players rated
2 Ireland grind their way to grisly win over Georgia
3 Jim McGuinness: There is a way to save championship and make it competitive
4 Sordid murder of hurling brothers still resonates in south Galway
5 Car sliced in half but Grosjean survives huge crash at Bahrain Grand Prix
Real news has value SUBSCRIBE