West Brom peg back Liverpool but look resigned to the drop 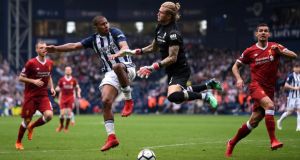 West Brom kept their slim hopes of Premier League survival alive with a stunning late comeback to draw 2-2 with Liverpool and take the shine off Mohamed Salah’s latest goalscoring landmark.

Andy Cole’s record of 34 in a 42-game season looks well within the grasp of Salah, who took the limelight away from Danny Ings’ first goal since October 2015.

The final word, though, belonged to Albion as they came from behind with goals from Jake Livermore and then Salomon Rondon in the 88th minute.

The point means the Baggies’ grip on their eight-year Premier League stay would continue unless Crystal Palace could earn at least a draw at Watford later in the day and Swansea beat champions Manchester City on Sunday.

It was just reward for the hosts, with caretaker-manager Darren Moore extending his unbeaten run to three matches including games against two of the top four.

However, it was harsh on Ings who looked set to enjoy a day to remember after some rotten luck since moving to Anfield from Burnley, with two serious knee injuries restricting him to just 11 appearances for the club in his first two seasons.

He seized his chance replacing the rested Roberto Firmino with a fourth-minute strike, his first in 931 days since scoring the last goal of Brendan Rodgers’ reign.

No-one could begrudge him his moment in the Black Country sunshine after he tore a cruciate knee ligament in Klopp’s first training session at the club, just days after winning his solitary England cap against Lithuania, and suffered another injury to his other knee just over a year later.

With one eye on Tuesday’s Champions League semi-final first leg at home to Roma Klopp made five changes, including three of the back four, and that gave Ings a chance.

Sadio Mane worked his way to the byline and drilled in a cross which Georginio Wijnaldum controlled before allowing his team-mate to blast home.

It was only the third of Liverpool’s last 27 league goals not to be scored by Mane, Firmino or Professional Footballers Association Player of the Year favourite Salah.

Ings was denied a second by goalkeeper Ben Foster’s outstretched foot late in the half but West Brom, to their credit, were not prepared to go down without a fight despite their long odds of escaping relegation.

They dominated the latter stages of the half and a rare miscontrol by James Milner allowed Livermore to whip over a far-post cross which James McClean drilled back across goal, but Jay Rodriguez’s lunge was inches away from converting a certain equaliser.

Ings had a penalty shout turned down after the break when Craig Dawson stepped across him to prevent him reaching Joe Gomez’s pass before Salah, quiet since an 11th-minute shot was deflected over by Livermore, came in from the periphery when substitutes Firmino and Alex Oxlade-Chamberlain combined to tee him up to coolly beat Foster in the 72nd minute.

Livermore, though, gave the hosts hope with a scrambled finish from a corner and Rondon headed home Brunt’s near-post free-kick with two minutes to go.