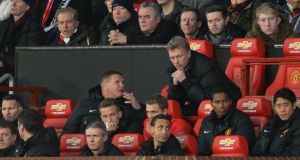 A pensive Manchester United bench during the 2-2 draw with Fulham at Old Trafford. Photograph: Peter Powell/EPA

Manchester United manager David Moyes was left to count the cost of a lack of a clinical edge up front as his side drew 2-2 with Fulham at Old Trafford.

Darren Bent scored a stoppage-time equaliser to salvage a draw for the struggling Cottagers, who had taken the lead through Steve Sidwell in the 19th minute. United hit back twice in two second-half minutes through Robin van Persie and Michael Carrick and were poised to snatch the points until Bent rescued a dramatic point.

“We went out and tried to win. We crossed it, passed and tried to get through but we didn’t quite have the finishing touches,” Moyes told Sky Sports 1. “If we had got a goal early on it would have completely altered the game. The more we went to score they had a couple of chances and one they went on to score from.

“We deserved to be in front. Quite often at Old Trafford, we lose a goal and end up chasing the game. We deserved to win the game and get three points but you don’t always get what you deserve. We kept knocking at the door but it wasn’t enough.”

Under-pressure Fulham boss Rene Meulensteen’s side remain bottom of the table but Sunday’s point puts them four adrift of Sunderland who occupy the last safe position in 17th.

Meulensteen was relieved to have claimed a point after United’s comeback.

“We made it difficult for them,” he said. “United have got some problems of their own. They kept creating chances and crosses but we defended well and held them. We thought at the end it’s going to slip away, all of the hard work that we’ve done but at the end to score that it felt like a winner.

“It was definitely intentional to stay deep. When you are in a situation like this you know confidence is not the highest and something down the line has to give.

“We focused on keening our shape and we defended well. The important things is we got a point. Some people classified us as dead and buried.”