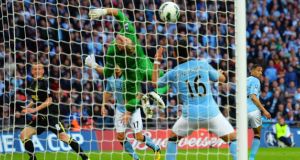 Wigan Athletic 1 Manchester City 0: Ben Watson’s last-minute header gave Wigan the FA Cup for the first time in their history as they provided one of the competition’s great upsets by beating Manchester City at Wembley.

Watson turned home Shaun Maloney’s corner to flatten 10-man City, who had Pablo Zabaleta sent off near the end.

It was a deserved triumph for the Latics, for whom Callum McManaman was outstanding, and completed a personal dream for chairman Dave Whelan, who broke his leg in the 1960 final.

But for City, it means a trophy-less campaign, and raises further questions over the future of Roberto Mancini, who it is rumoured will be replaced by Manuel Pellegrini in the summer.

Wigan boss Roberto Martinez came up with an ingenious way of trying to overcome the massive odds stacked against his team. In leaving Arouna Kone and McManaman upfield even as City pressed, he forced the Blues to temper their attacking instincts, denying them the width which adds to the obvious danger their flair players pose.

When the half-time whistle blew City could claim most of the best chances. But in Joel Robles, preferred in goal to Ali Al Habsi, Wigan had a goalkeeper in form.

The Spain Under-21 star turned away an early effort from Yaya Toure and denied Sergio Aguero and Samir Nasri later in the half.

In the middle was the best of the lot as Wigan’s notoriously flaky defence partnered to let Nasri through, which allowed David Silva to set up Carlos Tevez. The Argentina star looked certain to score as his effort headed to one corner as Robles plunged towards the other.

Somehow though, the on-loan Atletico Madrid man kept it out with his legs, one of those moments that ends up being etched in final history if Robles were to end up on the winning side.

And Wigan had chances to get their noses in front during that opening period too. McManaman was a constant threat, but first after running onto Kone’s pass and then electing to check inside and curl home with his left foot rather than shooting first-time with his right, then embarking on a Ricky Villa-like slalom and driving a shot against Zabaleta, he wasted the best of them.

Not that he could be blamed 18 minutes after half-time when he embarked on a bewitching run into the City box and was only denied by Vincent Kompany’s brave block.

City had improved overall, with James Milner introduced to provide an extra boost to the midfield effort.

Emmerson Boyce got a vital touch to Aguero’s near-post flick and Jack Rodwell had a long-range effort charged down as Mancini executed a tactical rejig to counter Martinez’s attacking intentions.

It was Wigan who hit the woodwork though, albeit unintentionally as Maloney’s intended far post free-kick bounced off the bar with Joe Hart stranded.

And they had an extra man six minutes from the end when Zabaleta chopped down McManaman to collect a second yellow card and follow Kevin Moran and Jose Antonio Reyes into the FA Cup final hall of shame.

It was the signal for another Wigan assault, and by now no-one could deny they deserved something from the game.Two free-kicks came and went before another McManaman burst forced Gael Clichy to concede a corner.

Maloney swung it to the near post and Watson rose to power it into the corner and carve Wigan’s name into history.