Traoré on the double as City’s defence proves a liability 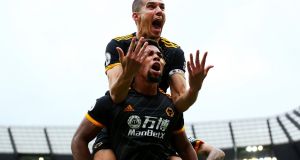 Manchester City are already eight points behind Liverpool following this concerning defeat, the result of two late goals from Adama Traoré on the counter that had been coming all afternoon from a dogged and focused Wolves.

City had dominated the ball throughout but lacked verve near Rui Patrício’s goal and were vulnerable when attacked. Traoré’s first, in particular, was all of this in microcosm. A City foray broke down and Raúl Jiménez made a mug of Otamendi then found the Spaniard, who showed plenty of composure with his finish. For his second Traoré was put through by Rúben Neves and again made no mistake.

The rhythm that signifies City are in their hypnotic groove never looked close to being established. Instead what unfolded was a disrupted display.

An illustration came early on when Riyad Mahrez found David Silva along the left; he had time to engineer an opening but this yielded nothing. Mahrez then committed a howler – the first of many from City – that had Guardiola crouching in anguish.

This was a pass that went straight to Jiménez. He sprinted at Ederson down the middle and Fernandinho was needed to perform a double-block: first with a leg, then via his head when Patrick Cutrone followed up.

Otamendi had been beaten with ease when Jiménez made room for his effort. Now, the Argentinian hit a second loose City pass. Again, Jiménez was the beneficiary. This time a combination of Fernandinho and Ederson kept the scores level, the No 9 ending on top of the latter in a sight reminiscent of mixed-martial arts.

Guardiola has discussed the need to be more solid at the back with regard to eliminating “clear chances”. What he was witnessing was City proving most at sea since Stones went down last month.

Five successive victories and only one goal conceded had followed. Yet when Jiménez skated past João Cancelo along the right and crossed, the ball travelled across the area to the unmarked Rúben Vinagre as more gaps were exposed. City rushed towards the winger, though, and a shot that might have troubled Ederson was deflected away.

Attack-as-defence is a truism of Guardiola’s virtuoso side, one he cited in the buildup. The problem, though, was a lack of a consistent edge near Patrício’s goal.

When the blue wave next went at Wolves Raheem Sterling did cause the goalkeeper to beat the ball out. More encouragement came via a Cancelo shot, a Sergio Agüero header back at goal, and a Silva cross. Yet, Wolves held firm. As Nuno Espírito Santo noted afterwards his players pressing in numbers caused City to hurry. When Cancelo collected in front of the Wolves D, four black-shirted opponents stymied him.

By the break City could reflect on a late Kyle Walker attempt, saved by Patrício, but the vulnerability in the rearguard was their glaring issue.

Walker, recovering from an infection, was replaced by Oleksandr Zinchenko for the second half. This meant Cancelo going to right-back and the Ukrainian taking his berth.

City, though, remained open to the counterattack. A Cutrone burst had Rodri scything him down, causing Craig Pawson to book the midfielder, the referee also showing yellow to Cancelo for an infringement earlier in the move.

If Jürgen Klopp and his Liverpool players were watching the conclusion was clear: City lacked the vibrancy and ruthlessness that had swept them to the last two titles.

The stuttering display had Guardiola introducing Bernardo Silva for Mahrez on the hour. Yet City frustration continued. David Silva seemed to make a fair challenge near Wolves’ area but Pawson gave a foul. Espírito Santo’s men moved up-field, won a corner, Ederson complained about the initial decision, and was booked.

There was better when David Silva crashed a free-kick off Patrício’s bar and in the ensuing action the same player went close with a hooked effort.

Guardiola’s final substitution was telling: on came Gabriel Jesus – not for Agüero but David Silva, the manager feeling the need for both strikers.

It yielded nothing as this ended as Wolves’ first league triumph over City in nine years, since David Edwards’s 57th-minute goal secured a 2-1 victory in October 2010. Espírito Santo’s side can boast a fine victory that moves them up to mid-table and City stare at a yawning gap to Liverpool well before the clocks go back at the end of the month.

Two defeats in eight matches make this City’s poorest start since 2013-14; they finished that season as champions but were only three points behind the leaders at this stage.

There is enough time to erase the current deficit but what may privately worry Guardiola is how sluggish his players look so early in the campaign. They had also done so at Everton last Saturday before eventually winning 3-1.

This was City’s first home league defeat since going down 3-2 to Crystal Palace on December 22nd last year. The experienced and garlanded Guardiola will not panic. But given Liverpool have won all of their league matches, the manager will need the impending international break to regroup ahead of resuming the championship defence in a fortnight.