Sunderland and Middlesbrough face off in derby of the doomed 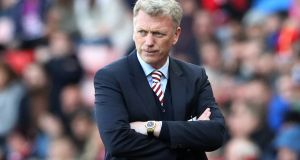 Sunderland manager David Moyes: “There’s still a chance and while there’s a chance, we’re going to try to take it.” Photograph: Reuters/Scott Heppell

It was David Moyes’s 54th birthday yesterday and Sunderland’s manager spent part of it deflecting questions about personal decline or, more specifically, the apparent waning of his once coveted coaching powers.

Forty-three miles south of the Wearsiders’ windswept training base at Cleadon, Middlesbrough’s interim manager, Steve Agnew, similarly held court at Rockliffe Park near Darlington, the club’s attractive, rather more sheltered, weekday headquarters, adjacent to a luxury spa hotel. Like Moyes, Agnew was fulfilling media duties before tonight’s so called “derby of the doomed” at the Riverside where the Premier League’s bottom two teams will contest possibly the least looked forward to Tees-Wear contest in a generation.

If his Sunderland counterpart was in downbeat mode, so too was Agnew. Aitor Karanka’s former assistant is still waiting for his first victory since succeeding the Basque and will be aware of mounting rumours he could shortly be replaced by Nigel Pearson. Although, mathematically, all is not quite lost for either side, both sets of supporters are pretty much resigned to relegation. The consensus is that with Boro nine points adrift of 17th-placed Hull City and Sunderland 12 points in arrears, the Championship inevitably beckons.

Granted Boro have a game in hand on Marco Silva’s team and Sunderland have two, but Agnew’s shot-shy players have won only four league games all season and none since mid-December when they beat Swansea City 3-0.

Sunderland, meanwhile, are bereft of pace and creativity and last tasted league victory in early February, defeating Crystal Palace 4-0 away, leaving a significant percentage of their fans furious at Ellis Short’s refusal to sack Moyes.

While only two reporters – and none from the national newspapers – turned up to listen to Agnew yesterday, the apparent slow car crash of Moyes’s career ensured a decent number were gathered before the former Everton, Manchester United and Real Sociedad manager. They heard him refuse to accept the inevitability of relegation while six games remain.

“There’s still a chance and while there’s a chance, we’re going to try to take it,” Moyes said. “We’re not stupid, we’re near desperation but we’re in there fighting and we still think we’ve got a chance.”

Achieving what would represent the most startling of a series of semi-miraculous escapes from the drop would surely involve winning all their outstanding matches but victory has become very much a stranger to Sunderland.

“It’s not nice when you’re not winning,” said Moyes. “You come into football to win, but at the moment we’re not winning most weeks. That’s hard to take.”

His sense of disappointment can only have been exacerbated by the promotion celebrations enjoyed by his old rival Rafael Benítez and Newcastle United on Monday evening. “There’s nothing we can do about what they do,” he said with a shrug. “We can only make sure we try to remain a Premier League team.”

In private, he has been preparing for next season in the Championship for some weeks now and, between scouting trips, there have been bouts of introspection invariably followed by renewed resolve to confound the critics.

“As a manager you look at yourself before anyone else,” Moyes said. “I will always question myself to see if I could have done better but I’ve had a lot of really good times in football and I’m 100% the same manager I was when I was winning at Everton.

“I would actually say I’m better now because of the experiences I had with Manchester United and in Spain. Losing does affect you but I know we will turn things round and the wins will come. It will definitely get better. It will change, no doubt about that – and I believe it will change this season.”

If everyone agrees Moyes inherited a poisoned chalice at Sunderland many feel he has been out-performed by rivals this season, most notably Hull’s Silva, but the Scot prefers to pin the blame on the peculiar pressures of one of English football’s most exacting postings.

“It would be wrong to talk about David Moyes and his reputation,” he said. “It’s more to do with Sunderland being a difficult job for any manager. It will change and it will improve but it has proved difficult for many managers, not just David Moyes. A lot of people have found this a difficult gig. Whoever was in the job would be finding it just as difficult as I’m finding it – but I don’t regret taking it at all.”

Agnew definitely did not relish Boro’s 4-0 defeat at Bournemouth last Saturday and has since staged both group and individual talks before what he describes as an “absolute must-win game”.

“There has to be a reaction after Saturday’s disappointment,” said Agnew who, despite the fact that his dream of a long-term managerial contract on Teesside is receding, remains determined to restore some local pride. “My job is challenging but I have every confidence in my ability to lift the players.”