Colin Bell’s side will also face the Netherlands, Norway and Slovakia ahead of 2019 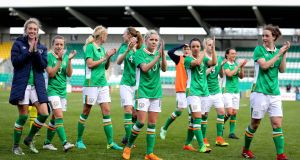 The Ireland women’s team will face a tough task in qualifying for the 2019 World Cup. Photo: Inpho

The Irish women’s football team have been drawn with former champions Norway as well as the Netherlands, Northern Ireland and Slovakia in their qualifying group for the 2019 World Cup in France.

Colin Bell’s side will have their work cut out to qualify with only the seven group winners going through automatically. The four best runners-up will play-off on a knock out basis for the one remaining European spot at the tournament.

Norway were World Champions in 1995 and twice European Champions before that but they have struggled to compete with the likes of Germany and the United States in recent years. They are nevertheless ranked fifth in Europe by Fifa, 14 places ahead of the Irish.

Ireland manager Colin Bell will be familiar with the bulk of their squad a majority of which is home based, having had a spell in the league himself with Avaldsnes fairly recently and he will be well aware too of their leading players overseas with the hugely experienced Nora Berge at Bayern Munich as well as rising stars like Caroline Hansel at Wolfburg and Ada Herberg of Lyon.

The Dutch, though, will present quite a challenge too. Despite lacking anything like the successful record of their male counterparts they have done better of late having qualified for the last World Cup. They will compete at this summer’s European Championships as hosts. They are rated as Europe’s sixth best side at present by Fifa.

The qualifying stages get under way in September. Ireland’s fixtures are due to be confirmed shortly.

1 Owen Doyle: Creeping professionalism of schools rugby a threat to the game
2 Niall Quinn happy to step into the breach at FAI
3 Coco Gauff pulls off biggest shock yet by beating Naomi Osaka
4 Wolves left to rue profligacy as Liverpool roll on
5 Rugby under threat; Niall Quinn steps into FAI breach
Real news has value SUBSCRIBE
Crossword Get access to over 6,000 interactive crosswords