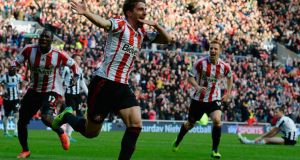 Alan Pardew predicted that this latest north-east derby might be decided by a clever substitution and he was proved right. Unfortunately for Newcastle United’s manager his opposite number, Gus Poyet, made it, his introduction of Fabio Borini looking inspired when the Liverpool loanee scored the winner to offer Sunderland much-needed Premier League succour.

Their first league win of a sorry season made Poyet’s home managerial debut one to savour, although it is unlikely to be a memory relished by Pardew.

Newcastle, supposedly anxious to atone for their 3-0 defeat by Paolo Di Canio’s side at St James’ Park in April, underachieved and Mike Ashley, their owner, is likely to be asking his manager all sorts of awkward questions.

His goal began with Adam Johnson’s corner. It was played short to Sebastian Larsson, who passed back to Johnson, whose floated, far-post cross eluded the outjumped Paul Dummett, allowing Fletcher to head beyond Tim Krul.

That concession represented a tough baptism for Dummett, the young, homegrown left-back making his first Premier League start out of position at centre-half.

Watching Krul sprawl to repel a subsequent Fletcher half-volley, it seemed hard to credit Sunderland had only one point from eight games.

Poyet’s task
Change was desperately needed and, even if Di Canio went the wrong way about implementing it, his reforms have arguably made Poyet’s task easier.

Newcastle – who had been playing well lately – were having a few too many nightmarish moments. Growing frustration manifested itself when Cheik Tiote escaped unpunished for shoving an arm into Larsson’s face and again as Yohan Cabaye was booked for a knee high tackle on Jack Colback.

Ben Arfa’s low cross shot precipitated the equaliser, Mathieu Debuchy nipping in at the far post to divert the ball past Keiren Westwood.

The goal arrived at the end of a move sparked by a disputed free-kick.
Guardian Service