Southampton strike to leave hapless Norwich on the brink 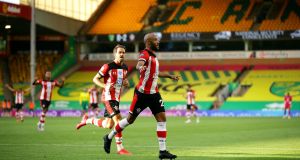 For Norwich the restart is over before it truly began. Turned over by a Southampton side that did not have to play well to win convincingly the Canaries remain bottom of the table. While the six-point gap to safety may not yet have grown, any belief among Daniel Farke’s side that they might yet escape relegation must surely have taken a fateful blow.

They had began the match just as you would expect a side that needs at least five wins from the nine games of the restart to stand a chance of staying up. They were on the front foot and in the opening two minutes forced a succession of free-kicks and corners. Emi Buendía takes every set piece for the Canaries and his delivery showed no signs of rustiness. Sadly the same could not be said for his teammates’ finishing, with Tom Trybull seeing his effort blocked in the box by Danny Ings no less, and Josip Drmic closed down too quickly by Jan Bednarek. That initial spell lasted for 15 minutes before Southampton began to exert themselves in midfield and close down the supply to Norwich’s forward four. The pace dropped and the visitors managed to get more of the possession too.

Perhaps sensing that their opportunity had passed, and not for the first time this season, the mistakes began to creep into Norwich’s game. In the 18th minute Ben Godfrey was caught on the ball by Ings at halfway and only the defender’s pace spared his blushes as he chased back to close down the shot.

In the 29th Norwich were caught napping at a corner and Stuart Armstrong was able to get off a low shot inside the box that Tim Krul was forced to smother. Five minutes after that came the first half’s big chance, when Todd Cantwell was eased off the ball by Jack Stephens and all of a sudden the seas parted. The centre-half ran with the ball all the way into the box before wisely cueing up Ings whose right foot effort was well-judged but crashed back off the Norwich bar.

With four minutes remaining of the half Norwich managed their first decent attacking move for over half an hour, and Kenny McLean received applause from his colleagues in the stands for a shot that was never troubling Alex McCarthy. As an attempt to instil confidence it didn’t convince and you can imagine that Ralph Hassenhüttl had a clear message for his team at half-time: go on and win this game.

It did not take long for Saints to press decisively on their hosts’ vulnerability. A ball into the Norwich box was not dealt with decisively and a spot of head tennis followed. When the ball finally dropped it was to Armstrong. The midfielder pushed possession to Ings, who was waiting in too much room on the edge of the box and with all of the goal to aim at. He sized up his opportunity and finished with characteristic decisiveness, curling a shot beyond Krul and inside the left-hand post

Norwich heads slumped and Saints grew in composure. Hassenhüttl’s voice, meanwhile, became the loudest noise in the stadium and directed every counterattack, of which there were plenty. One saw Southampton double their advantage in the 54th minute. Again it came from a turnover in the middle of the park and again the visitors were able to advance straight down the pitch without interruption. This time it was Ings who was the enabler and he passed the ball to Armstrong on the edge of the box. After dancing past an ineffectual challenge from Trybull he slotted past Krul.

Trybull, nominally the defensive midfielder in the team, was substituted minutes later alongside Cantwell. And with Saints perhaps thinking they had the match done Norwich created their best chances of the game. There were two of them and they both fell to Teemu Pukki, but both were missed. The first came on the counter in the 59th minute and Pukki had the pace to get away from Bednarek but dithered over the shot and allowed the Polish international to get a block on. Five minutes later Pukki was in an even better position inside the box but once again took far too long and Bednarek was there again. Pukki began the season with six goals in his first five games. With only five goals since, that start seems a long way away.

With 11 minutes to go Southampton put the matter beyond doubt and again it was too easy, Ings finding space in the middle of the park and releasing Michael Obafemi on the right. Obafemi teed up Nathan Redmond in the centre and he sent Max Aarons the wrong way with a feint before shooting calmly past Krul. – Guardian