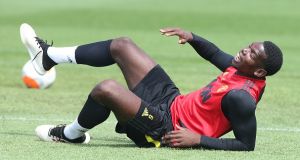 Ole Gunnar Solskjær is confident Paul Pogba can finally show his “world-class” ability after an injury-blighted season. The midfielder may return as Manchester United resume their campaign against Tottenham in London tonight, having not played since St Stehen’s Day because of a second serious ankle injury of the campaign.

The manager was asked yesterday whether Pogba could settle into a run of consistent form. “I really hope and believe,” Solskjær said. “Of course Paul has had his difficult season with loads of injuries but I can see his mentality and focus now that he is fit and training and available. He is one of the best midfielders in the world so hopefully we can get that going as soon as possible.”

Pogba is one of a quintet of five United midfielders, along with Bruno Fernandes, Scott McTominay, Fred and Nemanja Matic, considered by Solskjær to be of the requisite quality. “Any of them would be capable of playing a full season at Man Utd and being a regular so it’s given me, not a problem, but a nice challenge to choose the right ones,” he said. “They have had a good season. Bruno came in with a great impact [in January]and Paul getting back fit can only help us because he does have qualities that no one else has.”

United are in fifth, three points behind fourth-placed Chelsea, are in the FA Cup quarter-finals and look certain to progress to the same stage of the Europa League as they hold a 5-0 lead over Lask going into August’s last-16 second leg.

Solskjær believes Marcus Rashford is a potential future England captain and has said it is an honour to manage the striker, whose campaign over free meals for schoolchildren forced a British government U-turn.

Solskjær said: “It’s an honour to have Marcus and what he’s done during this lockdown. He’s been unbelievable – [to] help so many people that need it. He’s taken from his own experience when he was a kid. I know how much it means for the kids and we, as a club, are immensely proud of him.

“He’s obviously a top footballer but also a fantastic human being – a future leader, a future captain, maybe, of England, Man United, who knows? He’s already captained the team [United]. We’re really proud of him and his family must be so proud as well of what he has achieved.

“As his manager as well it’s been fantastic to follow Marcus during the lockdown period; he’s changed the lives of so many kids this summer, which is more important than any game he’ll play.”

Meanwhile, José Mourinho has accused the football authorities of double standards over the decision to ban Dele Alli for an ill-judged social media post about coronavirus but ignore much worse behaviour from others in the game during the pandemic.

Alli will miss tonight’s game after an English FA disciplinary hearing found him guilty of an “aggravated breach” of one of its rules that includes reference to race, colour or ethnicity.

Mourinho was asked to name who he was thinking about in terms of people who had broken the lockdown rules and he brought up his own breach – when he was pictured with Spurs midfielder Tanguy Ndombele on a common in north London, together with a couple of other men. At that point, people were permitted to exercise outdoors only with members of their own household.

Mourinho said he had “spent two minutes” with Ndombele, “nothing more than that”, trying to teach him how to use the “wifi GPS” vests with which the club monitor player performance.

The manager said Harry Kane, Son Heung-min and Moussa Sissoko would start against United after recovering fitness but there is a doubt over Giovani Lo Celso.Jan Vertonghen, who is out of contract on June 30th, is expected to sign a short-term extension to keep him at the club for the final matches of the season, before leaving for Italy or Spain. – Guardian