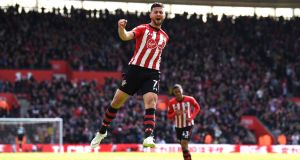 Matt Targett’s header looked to have sent Saints storming to a 3-2 derby win to cement their top-flight status in style, only for Wilson to spoil the party late on.

Cherries striker Wilson impressed in front of England boss Gareth Southgate, pushing his league goals tally to 14 — with nine assists thrown in too.

Shane Long’s fourth goal in five league games handed Saints the perfect start, only for Dan Gosling and Callum Wilson to turn the tide for Bournemouth.

James Ward-Prowse drilled a fine equaliser after the break though, before Targett nodded in to cap a smart Saints move.

Targett’s maiden top-flight goal was also the 1,000th Premier League finish of the season — but boasts far greater significance for Saints as the goal that seals their safety.

Back in early December Saints sat 18th in the table and with just three wins in 22 league matches under Mark Hughes across the back-end of last term and the start of this.

Hasenhuttl quickly transformed the atmosphere and attitude at St Mary’s however, and now his side can look forward to more productive times.

Another fast start had Saints racing ahead, Long again on target with a neatly-placed finish.

The hosts could not sustain the tempo however, and a tactical switch from Cherries boss Eddie Howe shifted the initiative.

Gosling coasted through Saints’ centre all to easily though, before drilling Bournemouth’s equaliser.

Long struck the post at point-blank range when he should have doubled his tally, failing to bury the rebound after Artur Boruc had parried his initial effort.

The Cherries then snatched the lead when Wilson tapped home, with Angus Gunn spilling a Brooks drive he should have held.

Saints were clearly aggrieved and vented some frustration when Ward-Prowse fired home from 20 yards.

Hasenhuttl’s steely Saints then wrestled back the lead, Ings unable to chest and turn in the box — but capable of stealing possession again and finding Ward-Prowse.

He laid out an inviting ball to Yann Valery, and the right-back’s whipped cross ushered in left-back Targett to nod home at the far post.

Saints should have closed out the win from there, but this clash was far too open for that.

Instead Wilson tapped home his second, and should have wrapped up a hat-trick only to fire at Gunn’s legs when clean through.