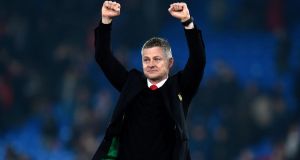 Ole Gunnar Solskjær has been handed a three-year deal as Manchester United manager. Photograph: Will Oliver/EPA

Important this, because any projected summer signings will think twice if Manchester United are competing in the Europa League next season.

Most people imagined the club would wait until the end of the season before making an announcement on the next permanent manager, if only to wait and see whether Solskjær really could deliver the Champions League place that seemed to be beyond Jose Mourinho.

The club have jumped the gun to an extent, perhaps because of the novelty of finding themselves with a universally popular candidate in situ, but the danger is Arsenal and Tottenham holding tight to third and fourth places and leaving Solskjær and his fairytale appointment with a sense of deflation after three months of euphoria.

A good showing against Barcelona

No easy task, clearly, but you cannot put Manchester United back on its feet without confronting the best Europe has to offer.

Ten points clear at the top of La Liga, Barcelona certainly look the best Spain has to offer at the moment. At no time in the last five years would United have been expected to reach the Champions League semi-final by removing such high-calibre opposition, so in that sense Solskjær has little to lose, though it is also true that the improbable win against the odds in Paris did much to make his eventual installation inevitable.

As with the situation in the domestic league, if the formula cannot be repeated and Barcelona put United’s revival into a more realistic perspective, a few more of the balloons surrounding Solskjær’s appointment will be pricked before the end of the season. Knock Barcelona out, on the other hand, and legendary status will be confirmed.

This should not be difficult; Mike Phelan doesn’t appear to want to go anywhere else, and if David Moyes had his time again he might think twice about his decision to move the assistant out. Bringing him back seems to have worked as well as could be expected.

Make a decision on a director of football

This may no longer be as urgent a consideration as it became under Mourinho, since Solskjær may well regard Alex Ferguson as the only sounding board, recruitment expert and guarantee of ongoing continuity the club needs.

The whole point of the Solskjær-Phelan-Ferguson axis so far has been to return the club to the way it used to be, and as long as Solskjær remains in charge there seems no reason why that should not continue, though someone in overall control of transfer policy would make sense if United are to continue changing managers every couple of seasons.

Marcus Rashford and David de Gea are among those in this category. There is no area of the United squad that is crying out for reinforcement, despite Mourinho’s frequent complaints about a lack of central defenders.

Rashford is an exciting young player who could still become much better, however, and United need to make sure they secure him for the long term. De Gea may no longer be the Real Madrid target he once was, but he remains one of the best goalkeepers around and United know better than most how difficult it can be to find a quality replacement in that position.

At some point sooner rather than later if he is to stick around for three years Solskjær will have to take steps to make United his team, as opposed to a collection of individuals inherited from previous regimes. There is no shortage of possible targets – names mentioned just in the last few days include Jadon Sancho, Callum Hudson-Odoi, Declan Rice, Aaron Wan-Bissaka and Harry Maguire – but ideally Solskjær should attempt to bring in someone young, exciting and suited to his attacking style of play. Not like Marouane Fellaini (Moyes), Bastien Schweinsteiger (Louis van Gaal) or Alexis Sánchez (Mourinho).

Find a diplomatic way to deal with Sánchez

It is fairly embarrassing when your highest-paid player rarely makes the starting line-up and generally disappoints when he does make an appearance. It seems fairly clear to all that the Chilean’s transfer to Old Trafford has not been a success, and his reported £500,000-a-week wages are complicating other contract negotiations.

Solskjær appears to be at odds with the club over whether to keep Sánchez or try to move him out, though both must know it will be difficult to do any profitable business over a player on big money with few, if any, prospective takers.

Leona Maguire left playing waiting game 21:52
Barcelona and Bayern battle for right to take on nouveau riche 20:44
Caldwell makes himself at home at Celtic Manor 20:32
Anderson swings back into form against Pakistan 19:52
Selby strikes back against O’Sullivan 18:44