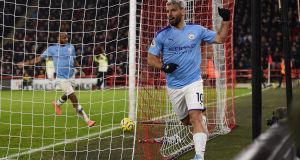 Sergio Agüero came off the bench to restore normal service for Manchester City, securing a win with a sharply taken goal when the defending champions appeared in danger of being held for a second game in succession.

Certainly before Agüero’s introduction there had been little to choose between the sides, which is as much a compliment to Sheffield United as a criticism of City’s performance, though there might have been had not Gabriel Jesus seen a first-half penalty saved by Dean Henderson. The striker has been unsuccessful with all three penalties he has taken for club and country this season, and if Pep Guardiola is going to persist with using Agüero sparingly he might like to consider giving someone else a turn from the spot.

City welcomed back Aymeric Laporte a few days earlier than anticipated, and nearly lost him again after a mere 12 minutes when Mo Besic was booked for an untidy challenge that left the defender in a heap on the edge of his own penalty area, though after receiving attention the Frenchman was able to continue.

The visitors retained Fernandinho in a back three to match up with the home side’s formation, yet United almost found a way through in the opening minutes when Oli McBurnie played Billy Sharp behind the City back line. United briefly held a numerical advantage but Sharp was unable to pick out John Fleck with his cross.

It was United’s turn to get lucky midway through the first half when Chris Basham miscontrolled on halfway to leave Raheem Sterling sprinting clear. The winger supplied Riyad Mahrez on the right and moved up to meet the return pass with a first-time shot, only to see Dean Henderson dive to his right to save. While it was a good stop by the goalkeeper United had been opened up, and from a position near the penalty spot a more accomplished finisher, Sergio Agüero say, might have scored.

Henderson came to his side’s rescue again just minutes later, when Nicolás Otamendi came up for a corner and managed to improvise an aerial volley that stayed low and on target but was kept out by the goalkeeper’s legs.

Henderson’s finest moment was still to come, however, for 10 minutes before the interval the goalkeeper on loan from Manchester United kept out a Gabriel Jesus penalty. City had perhaps been a tad fortunate to see it awarded – Mahrez appeared to be losing control of the ball on a slalom through a crowded area by the time Basham arrived to bring his progress to an abrupt halt, but with Agüero on the bench Jesus stepped up to take the kick and put it at a comfortable height for Henderson to save.

The goalkeeper was a yard off his line when the ball was struck and VAR could theoretically have ordered the kick to be retaken – the rules allow for an intervention in the case of “a clear and obvious error by the on-field match officials relating to goalkeeper movement” – but as applause for Henderson’s heroics were still ringing round the ground as the game restarted the officials wisely opted not to start a riot.

The home crowd were incensed enough by half-time as it was, after seeing Ollie Norwood booked for a foul on Fernandinho when the City player had already got away with a couple of similar tactical offences without punishment. By the time Fernandinho did receive a caution, right on the stroke of the interval, he almost appeared to be asking Lee Mason to take action by piling into McBurnie from behind with no chance of winning the ball.

Rodrigo was close for City after an hour with a looping header from a Kevin De Bruyne corner, before Jesus brought another save from Henderson, this time a routine stop, with an underpowered header from Rodrigo’s cross. City were attempting to step up the pressure but United had a chance of their own when McBurnie and Basham combined on the right to find Lys Mousset in the middle. Unfortunately the substitute had to turn to retrieve the ball and by that time the chance was gone, a hopeful backheel no more than a backpass to Ederson.

The travelling support had been singing Agüero’s name for some time by this point and with 23 minutes remaining City’s leading scorer came on. The effect was close to immediate, for with 17 minutes remaining the visitors were leading. All it took was one measured De Bruyne cross, expertly placed between Jack O’Connell and John Egan, and a typically well-timed Agüero run to meet the ball and slide it home. United would have been doubly aggrieved because moments before, McBurnie had narrowly failed to connect with a similarly inviting cross from Enda Stevens after Kyle Walker had lost the ball, though replays gave the impression a goal might not have passed a VAR test anyway. – Guardian